SPRINGFIELD — One day after calling up 375 members of the Illinois National Guard in Chicago, Gov. JB Pritzker announced another 250 guardsmen will be activated as he issued disaster proclamations for nine counties amid ongoing protests and riots across the state. 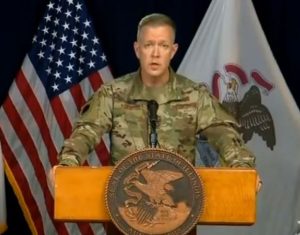 “Since that deployment, we have received additional reports of escalating situations and requests for assistance from communities around the state,” Pritzker said at a news conference in Chicago Monday. “We have now called up an additional 250 members of the Illinois National Guard, to be ready to assist other cities across the state that have faced a surge of destructive action, notably looting, over the last 24 hours.”

Pritzker made the announcement at the James R. Thompson Center in Chicago. Protestors took to the streets in that city in objection to police violence against black Americans over the weekend. Those protests were sparked around the nation, and around the world, by the death of George Floyd, an unarmed man who died Monday, May 25, in Minneapolis after being pinned to the ground for nearly nine minutes with a white police officer’s knee on his neck.

Some at the protests engaged in widespread looting, arson and property destruction, but Pritzker and members of law enforcement drew a line at the news conference between those who protested peacefully and those who incited violence or destruction.

Lt. Col. David Byrd, deputy director of the Illinois State Police, said as a black man, he was hurt by Floyd’s death. As an officer, he said he was also “ashamed” when he watched the footage.

“The ISP supports the peaceful protests that are occurring across the nation and across the state of Illinois for members of our community who want their voices heard,” Byrd said. “We’re also committed to protecting the fundamental rights of life and property.”

Byrd said ISP helped several local departments with crowd control over the weekend, and the officers will help with traffic control, “investigative components” and “several missions” that have been identified moving forward.

Pritzker said the disaster declarations will allow the state to “coordinate state agencies and resources as we work to assist local governments with their disaster response and recovery operations.”

“It is difficult to put into words the damage that has happened to our communities over the weekend,” Pritzker said, noting the difficulties of a “second rebuilding” after COVID-19-related shutdowns.

He added “the pain will fall disproportionately on the backs of our small business owners, our working families and our communities of color.”

“It has to stop,” the governor added. “We have to take care of our people. And for that reason we will continue to flexibly deploy Illinois State Police and the National Guard strategically as we work with the dual purpose of protecting Illinoisans, as well as the First Amendment rights of peaceful protesters.”

While Pritzker said some will point to the looting and “use it to dismiss the pain and the anguish and sorrow of the moment,” the peaceful protestors should not be overlooked.

“We cannot allow those who have taken advantage of this moment to loot and smash to also steal the voices of those expressing a need for real, meaningful change,” he said. “That will not be our story here in Illinois. Because this anger doesn’t come out of nowhere, it’s born of decades and centuries of systemic racism and injustice.”

Brig. Gen. Richard Neely, adjutant general of the Illinois National Guard, said the Guard was used to “provide a cordon” around the city of Chicago Sunday, setting a perimeter and “supporting those peaceful protesters and ensuring control of the downtown area.”

“Again, we will continue to support local law enforcement, Illinois State Police, we’ll continue to plan, along with each of the emergency managers across the state and the local communities and mayors, to support a response to this civil disturbance that’s currently ongoing, and we just echo the governor’s call for peace,” Neely said.

Pritzker said the disaster declarations allow the state to quickly mobilize resources if needed, and that’s the extent of what they will be used for at this point.

“I think what we’re trying to do, again, is to operate flexibly and that’s what a disaster proclamation allows us to do in these circumstances,” the governor said. “But it is limited right now to simply law enforcement and being responsive to the needs of those counties without having to deal with a lot of red tape when you need to move quickly within minutes or hours to help local law enforcement.”

PHOTO: Brig. Gen. Richard Neely, adjutant general of the Illinois National Guard, speaks at a news conference in Chicago Monday. He said the Guard was used to “provide a cordon” around the city of Chicago Sunday, setting a perimeter and “supporting those peaceful protesters and ensuring control of the downtown area.”

Head Start ramps up services, getting help with grant

Pritzker to Congress: We need a national containment strategy