FreightWeekSTL turned to the ports serving the area on Tuesday, with the focus on collaboration as a key to success.

A panel discussion featured the directors of four ports in the bi-state St. Louis region and Kansas City, Mo., who enthusiastically touted their ability to work together. Significant investments, they said, are fueling growth, There has been a surprisingly minimal impact of COVID-19 on port operations to date, they said. All events during FreightWeekSTL are being done virtually.

Opening the session, Dennis Wilmsmeyer, executive director of America’s Central Port, used his own port facility to reinforce the significance of all ports in the midst of this COVID-19 crisis.

“Like many others in the freight industry, we are classified as essential. We have access to six Class I railroads, two multimodal harbors, four interstate highways, and millions of square feet of warehouse space, plus manufacturing areas and developable sites,” said Wilmsmeyer. “With our transportation and logistical advantages, we have attracted 80-plus commercial tenants and our harbor operators transport more than three million tons of goods valued at more than $1.1 billion annually.”

He added they are well positioned to handle all products and when the demand for one product wanes,  there is usually another right behind to fill the void; something that is helping to keep volumes as usual even as the pandemic results in necessary changes to protect workers and help prevent the spread of COVID-19. That trend also seemed to be playing out at the other ports and the consensus is the port industry has largely been unimpacted and will do OK with any resulting deglobalization.

While not moving the level of volume ACP does, Richard Grenville, vice president of Multimodal Logistics for Port KC, noted that his port has been growing. When the Kansas City Port Authority rebranded as Port KC in 2015, it was seeing approximately 300,000 tons of cargo other than sand and gravel move on the Missouri River, and by 2019 that had grown to more than 600,000 tons of cargo moved along with 3.1 million tons of sand and gravel. That number is only expected to continue to grow in the wake of recent investments, which include $750,000 for new moorings and $1.7 million for a new storage facility. Those are in addition to Port KC’s 2018 acquisition of a shuttered steel mill east of city, which it is redeveloping into a rail and water intermodal terminal to serve Kansas City and the region. 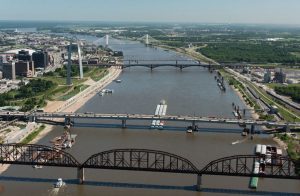 “The existing port is long and narrow and only nine acres. That’s why we purchased the 415-acre steel mill site that is rail, river and road served and right off I-35,” said Grenville. “We hear from shippers all over the country that they want options and don’t want to be tied to one gateway. I think the inland waterway system with the expansion of the Panama Canal moving the line from east coast to west coast has really helped us develop this concept of container-on-vessel (COV) on the Mississippi and adjacent rivers, and it’s going to be huge for the industry.”

COV service would pair with container-on-barge service as part of a hub and spoke system that would include the various other ports on the panel, as well as the port of Memphis.

The Jefferson County Port Authority was represented on the panel by Executive Director Neal Breitweiser, and since his port in Herculaneum has been identified as a hub for a key terminal in the proposed COV service, he expanded on the opportunities it presents. He clarified that all the public ports are collaborating with the same goal in mind in partnership with American Patriot Holdings (APH) and the Port of Plaquemines in southern Louisiana. That goal is to use patented vessels APH is developing that would be capable of carrying mass quantities of containerized freight at more rapid upriver speeds on an all-water route, connecting ports in the St. Louis region and elsewhere in the Midwest to the a gateway port at the Port of Plaquemines on the lower Mississippi River — and ultimately to Asia, Europe and other foreign ports. Hybrid vessels would also connect with other ports on the tributary rivers, where they could pick up additional freight and COB services would also support the hub-and-spoke system. Two independent, third-party studies reveal shippers using the new service could see cost savings ranging from 40 to 44 percent.

“We’re in this together. We’re not competing as we all have the same goal of making an efficient waterway system that’s unlike any other in the world,” said Breitweiser. “I believe together we can do this.”

This desire to innovate and adapt is also evident at the Kaskaskia Regional Port District, which actually includes five different terminals at five different locations and has grown to be the 10th largest inland port in the nation.  General Manager Ed Weilbacher said the port didn’t have that ranking when he began. As a port that predominantly moved coal, KRPD saw that commodity drop from a high of 4 million tons annually to just 400,000 and realized the need to diversify the product line and invest in infrastructure to succeed. That started with a 50-ton overhead crane at KRPD #2 that built some added capacity and attracted a steel processor, then a fertilizer company located there too.

“We started shipping slag, frack sand, steel, fertilizer and more and were fortunate to be able to improve one of our locations to serve a new power plant, the last coal fired power plant in the country that meets air quality requirements,” said Weilbacher. “We got to 1.5 million tons through those investments.”

KRPD continues to add improvements to address the need to move fly ash and gypsum outbound from the plant to markets around the country, and it has plans for a second rail loop, moving some outbound conveyers and some sidings. It is a $9 million project Weilbacher hopes to get funded through the state capital program in partnership with the Economic Development Agency. A new entrance for KRPD 2 was recently completed and there is a new master plan for the port that will lead to further investments at that location and open it up for additional public private development.

Grenville highlighted how each port has a unique book of business and how, by forming relationships, it sends a message of developing an integral transportation system to the industry.

“This is important when marketing your region and it sends a message of industrial cooperation,” said Grenville. “The goal of our port and the system in general is to get more barge loads on the river and keep freight rates competitive, and I think we’ve been very good at cooperation. We’ve seen the industry embrace ports that work together.”

Mary Lamie, executive vice president of Multi-Modal Enterprises for Bi-State Development, which operates the St. Louis Regional Freightway as one of its enterprises, moderated the panel and commented on the significance of the collective ports’ commitment to collaboration.

“Industry is appreciative of that collaboration,” said Lamie. “It helps to support affordable transport rates as a whole for the inland waterways.”

FreightWeekSTL 2020 continues online through May 22 and will feature a variety of additional engaging educational and collaborative sessions with industry experts and leaders in freight, logistics and transportation. The week-long event being delivered by St. Louis Regional Freightway, The Waterways Journal and Bi-State Development is sponsored by Burns McDonnell and Lochmueller Group, with Arco, Contegra, CMT and Southern Illinois Construction Advancement Program (SICAP) serving as supporting sponsors. To learn more and view each of sessions for FreightWeekSTL 2020, visit www.freightweekstl.com.