Four panelists for the first virtual discussion of the week were united by a common theme of the importance of communication and collaboration as a driver of success, and what impact the COVID-19 pandemic crisis is having on their waterway operations. 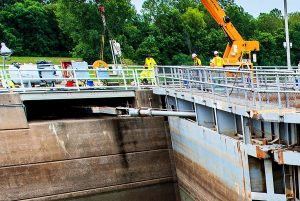 The first half of the panel session focused on the creative approach by the U.S. Army Corps of Engineers and Kaskaskia Regional Port District (KPRD) to keep the Jerry F. Costello Lock and Dam open longer during the historic 2019 flooding. Kaskaskia Regional Port District (KRPD) jointly handles operations on the Kaskaskia River via a three-way partnership between the Port, the Corps and Illinois Department of Natural Resources. Ed Weilbacher, general manager of KRPD, provided some context for the importance of the creative approach deployed in conjunction with the Corps pf Engineers to implement operational changes that kept the lock open for 17 days longer than typical during high water events, enabling commerce to keep flowing on the Kaskaskia River.

The lock and dam is located where the Kaskaskia flows into the Mississippi River in Southern Illinois, about an hour south of St. Louis.

The Kaskaskia River is a critical transportation link for several commodities, including scrubber stone and coiled steel inbound, and grain and slag outbound, moving 1.5 million tons per year, a volume that Weilbacher believes could double in the next year or so. The river is navigable due to the Jerry F. Costello Lock and Dam – which is only 8/10 of a mile upstream from the Mississippi River channel and, therefore, greatly influenced by high water conditions on the Mississippi River. Spring and summer flooding conditions last year significantly impacted commodity flows on the Kaskaskia River.

“Most customers have a supply chain that can handle some disruption and limited closures for about five days,” said Weilbacher.  “Ultimately, the lock ended up being closed for 87 days, but it would have been closed for many more beyond that if it wasn’t for the U.S. Army Corps of Engineers’ outstanding flexibility in taking creative measures to help to minimize the impact.”

Courtney Wilson, assistant manager of the Kaskaskia Navigation Project for the U.S. Army Corps of Engineers, outlined how the creative approach deployed was something they had been working on following river flooding in 2016, after communications with the port and industry members led them to conduct an analysis on the impact of raising the lock arms and exploring if that was something they could do safely. Given the nature of the 2019 flooding which was not characterized by bigger, faster floods that could swiftly carry larger debris into the lock arm cavity, the U.S. Army Corps of Engineers determined that, with some additional labor and other operational changes, the lock could operate safely at a level of approximately 382.5 feet, ultimately allowing barge traffic to move through the lock at 2.0 feet higher than normal operating conditions.

“The big difference this time that allowed us to make these changes was a direct result of the longevity of the flood,” said Wilson. “We decided if we took our time and had spotters, that we could do it safely. It ended up going so well that we could definitely consider doing it again.”

Keeping the lock open at the new elevation required that four employees had to be assigned to strategic lock locations with fire hoses to be able to flush any debris out of the lock arm cavity to avoid breakage and debris getting clogged in the mechanical lock arms.  This manpower modification created a more efficient method to operate the lock that allowed for 11 more operational days at the end of the first flood, shaved one day off the beginning of the second flood and facilitated opening the lock four days earlier at the end of the second flood.

To understand the significance of being able to keep the lock operational for more days, Weilbacher cited just one customer, a power plant, which ended up spending more than $1 million in extra shipping costs via truck to bring in needed materials during the lock closures. Adapting in this way clearly yielded significant benefits for industry, with whom KRPD was in regular contact as the changes were developed and implemented. And both Wilson and Weilbacher hope it helps to make the case to get to a permanent fix, a project that would cost $1.5 million, but deliver a value far beyond that. It would replace the 40 plus year old arms with new ones that would last for decades and would be even more effective than the operational changes put in place last year, bringing much needed certainty. That takes on added significance given that COVID-19 has the potential to negatively impact available manpower, and therefore could prevent the Corps from operating safely at the higher level given that almost half their employees were engaged in the operational solution deployed in 2019.

Change of command, no change in philosophy

The second half of the panel featured a conversation with outgoing Coast Guard Captain Scott Stoermer, Commander of Sector Upper Mississippi River, and the incoming Commander Mick Scott, who currently serves as Deputy Commander. Picking up on the theme of good communication, Capt. Stoermer focused on the shared governance that guides the Coast Guard’s operations, with everyone involved, from the federal government, Coast Guard and the Corps, to state government, port communities and customers and even the public at large and recreational boaters.

“It really involves a collaborative approach to keep things moving as safely as possible,” said Stoermer. “When one considers how one user in Ed’s example spent more than $1 million to reroute necessary cargo because they didn’t have access to the efficiency, safety and security of the waterways, you can only imagine the impact across the system when things aren’t moving.”

Stoermer has been responsible for more than 2,200 miles of commercially navigable waterways on the upper Mississippi, Missouri and Illinois Rivers, but he pointed out those are part of a total system that includes 25,000 miles of navigable waterways and 360 ports across the nation that have an economic value of $5 trillion. He shared that the USCG’s Waterway Action Plan sets up the shared governance they operate under and that solid communication is imperative in implementing the plan.

Deputy Commander Scott who will take the reigns from Capt. Stoermer in late May said that his top priorities to support shippers’ and carriers’ ability to transport freight safely and cost effectively are communications and operational fllxibility, which represent a continuation of the philosophy of his predecessor.

“The Waterways Action Plan formalizes centuries of hard lessons learned on how to operate, how to succeed and how not to fail, and I feel that all is rooted in communication and teamwork,” said Scott.

He went on to cite how he was involved in the decisions to reopen the St. Louis Harbor during the 2019 flooding, and how, after seeing the amount of days closed and the millions in revenue lost by the industry, they recognized they had to do something. Even though some of the windows they could reopen were measured in only days or even hours, he said he believes it was worth it and the right thing to do.

“Successes like that are almost entirely a function of communications,” Scott added.

In discussing his second priority, operational flexibility, he pointed to plans to move a U.S. Coast Guard Cutter from Omaha, Nebraska, to St. Louis, which will be a benefit across the river system in the short term, and highlighted that changes being implemented over the next 10 to 12 years to replace aging fleet vessels will ensure they are in really good shape down the line to continue to support freight movement on the waterways. He also highlighted how he plans to continue to leverage technology, including eATON, or electronic aids to navigation, which he sees as a force multiplier for their operations. Stoermer added they have already been out for their spring runs and that floating aids to navigation constellation is in really great shape from New Orleans to Minneapolis/St. Paul, while it will take some additional time to repair some of the shore side aids to navigation damaged during the 2019 flooding.

All the participants stated that while they have had to modify certain operations based on COVID-19, business basically continues uninterrupted by the pandemic.

“I’m proud to say we’re well equipped to deal with ambiguous and strange challenges and unknown circumstances, and this time is no different,” Stoermer said. “We’re open for business and conducting missions since implementation of some of the requirements. That no one has been diagnosed with COVID to date is a testament to their commitment to following the requirements, and we will stay at it as we work though the recovery phase. Industry similarly has responded professionally as we work with a region of professionals that also responds in a resilient and adaptive way, and I’m impressed with how they’ve implemented plans and new safety procedures.”

Mary Lamie, executive vice president of Multi-Modal Enterprises for Bi-State Development, which operates the St. Louis Regional Freightway as one of its enterprises, closed out the panel.

“Our goal in hosting Virtual FreightWeekSTL 2020 is to continue the tradition of bringing together industry leaders to share ideas and innovations that are shaping the future of the freight industry,” said Lamie. “The leaders who joined us today didn’t disappoint, and while we don’t often hear about exceptional communication and cooperation among some of our government agencies or between them and industry, they reinforced that, not only does it exist for their organizations; it’s an absolute priority.”

The FreightWeekSTL online experience continues through May 22 and will feature a variety of additional engaging educational and collaborative sessions during which industry experts and leaders in freight, logistics and transportation will share ideas and explore ways to support the long-term growth of the regional and national freight economies, while also providing further insight on the impact of the COVID-19 pandemic. The week-long event being delivered by St. Louis Regional Freightway, The Waterways Journal and Bi-State Development is sponsored by Burns McDonnell and Lochmueller Group, with Arco, Contegra, CMT and Southern Illinois Construction Advancement Program (SICAP) serving as supporting sponsors. To learn more and view each of the sessions for FreightWeekSTL 2020 as they are released, visit www.freightweekstl.com.

FreightWeekSTL was originally launched in 2018 in partnership with The Inland Marine Expo (IMX) conference, an annual trade show for the inland and intracoastal marine transportation industry. While the 2020 conference has been rescheduled for Sept. 29-Oct. 1, 2020 at the Dome at America’s Center, FreightWeekSTL is continuing to partner with IMX by including two of the panel discussions originally scheduled to take place during IMX as part of the FreightWeek line up.

PHOTO: A creative approach was employed by the U.S. Army Corps of Engineers and Kaskaskia Regional Port District to keep the Jerry F. Costello Lock and Dam open longer during the historic 2019 flooding.