SPRINGFIELD – As the COVID-19-related death toll surpassed 4,000 Friday, Gov. JB Pritzker said the state is focusing on expanding the number of tests performed each day – an effort he said is critical to reopening the state’s economy.

“Reaching 20,000 tests per day is a great milestone, and we should celebrate it,” Pritzker said. “It put us in a position to keep more people safe from the virus and get people back to work faster, yet there is more to come, and much more for us to do.”

Pritzker said the Bloomington site, which had been scheduled to close this week, will remain open through May 22, but that his administration is working with leaders there to find other ways of expanding testing in that community.

In addition, Pritzker said, six new testing sites have recently come online in Chicago, and four new drive-thru sites will start operations in the coming days on Chicago’s south side, and in Rolling Meadows, Peoria and Champaign.

A searchable map of those sites is available on the state’s coronavirus website.

“Having the ability to know whether or not you currently have the virus provides a small comfort in a world with so many unknowns,” Pritzker said. “More tests also means more surveillance so we can respond to where outbreaks are taking place. But just as importantly, testing is fundamental to our ability to reopen the economy while controlling the spread of the virus. That’s what it takes.” 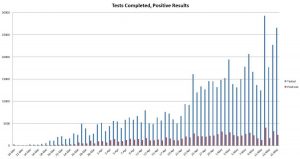 There are now 90,369 confirmed cases of the virus in the state among 538,602 people tested. The cases have resulted in 4,058 deaths. In the past 24 hours, there were 2,432 more positive cases confirmed among 26,565 tested, making for a 9.2 percent positivity rate, which continues to trend downward.

Pritzker said the current seven-day rolling average of tests shows a 12 percent positivity rate. That is well below the 20 percent benchmark for regions to move into the next phase of reopening, when retail businesses, offices barbershops and hair salons will be allowed to reopen under guidelines from the Illinois Department of Public Health.

Pritzker said that on a rolling 14-day average, all four regions of Illinois are meeting the positivity rate standard for moving into the next phase, which could happen as soon as May 29.

The governor warned of extrapolating too much about positivity figures, however.

“But I would urge caution in reading too far into this decline as there is a strong inverse correlation between the number of tests taken per day, and the associated positive rate, meaning that part of the reason for the lower positivity rate can be attributed to our increased testing,” he said.

Pritzker said the most recent seven-day average of tests completed extrapolated over an entire month shows the state is now capable of testing 4.7 percent of its population per month.

“And we won’t stop growing our testing until this pandemic is over,” he said.

IDPH also reported 130 additional deaths since Thursday, bringing the statewide total since the pandemic began to 4,058.

Among the recent fatalities was a resident of the Illinois Manteno Veterans Home, the second resident of the facility to die from the disease. There have been 53 confirmed cases there.

Hospitalization numbers related to the virus decreased slightly Friday while remaining within averages of the past month. As of midnight, there were 4,367 hospital beds occupied by COVID-19 patients, including 1,129 intensive care beds and 675 ventilators.