SPRINGFIELD — The U.S. saw nearly 3 million more unemployment claims the week ending May 9, including another 72,993 in Illinois, according to the U.S. Department of Labor.

The 2.98 million claims nationwide in the week pushed the jobless claims in the first two months of the novel coronavirus pandemic to more than 36 million. The unprecedented number of claims made for a national unemployment rate of 15.7 percent the week ending May 2. 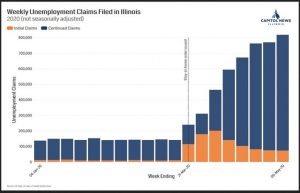 Continued claims reached 756,441 in the state last week, which was the final period before contractors and self-employed persons were able to file for special federal pandemic unemployment assistance in Illinois.

“While the number of initial claims for regular benefits has plateaued in the last two weeks, IDES will experience an increase in overall claims processed when the federal pandemic unemployment assistance claims data becomes available Thursday, May 21,” according to the department’s news release.

Gov. JB Pritzker said this week more than 50,000 applications had been filed through the state’s new pandemic unemployment assistance system since Monday.

“It is working reasonably well,” he said of the new portal in his Tuesday daily briefing, calling the new system “a more robust system than the existing one for regular unemployment.”

Pritzker said the existing system was “built on a 10-year-old platform not expecting to take the kind of size of applications that have come in for regular unemployment.”

Reports of long wait times and an inability to reach employment offices over the phone persist amid the unprecedented inflow of new claims.

“We have many thousands of calls that come in each day, thousands get answered and responded to. And people get processed over the phone as well,” Pritzker said in his Wednesday briefing.

The state has expanded call center capacity and Pritzker said online applications are the best way to get an application through the system.

“I realize that it is difficult when you can’t file, if there’s some problem with your filing online, and it requires perhaps an arbitration or some other intervention that it does have a personal discussion with somebody,” Pritzker said Wednesday. “We’re working very hard; we’ve just spun up this outside call center to add on top of the internal IDES capability. And we’re getting to them as fast as possible again with an unprecedented number of filings, it is difficult.”

IDES said in the news release it has processed 33,729 Pandemic Emergency Unemployment Compensation claims, which provide up to 13 weeks of federally-funded benefits to individuals who have exhausted regular state unemployment benefits.

At his Thursday briefing, Pritzker announced a new “Get Hired Illinois” website that is aimed at connecting job hunters with employers looking for new employees. That site, at Illinois.gov/gethired, also has information on virtual job fairs and training opportunities.

He said from June through December, in a partnership with online learning platform Coursera, the state will offer unemployed workers “free, unlimited access to 3,800 online courses and 400 specializations offered by over 160 of the best universities in the world.”

Pritzker said the level of access normally costs $400 a year, but is free to those who are unemployed in Illinois.