State budget among top items to be considered

SPRINGFIELD – Illinois lawmakers will return to Springfield next week for the first time in more than two months to take up a state budget and other critical matters while following strict social distancing and public safety guidelines during the COVID-19 pandemic.

During teleconference caucus meetings Wednesday, House and Senate Democrats were told the special session will run from Wednesday, May 20, through Friday, May 22. 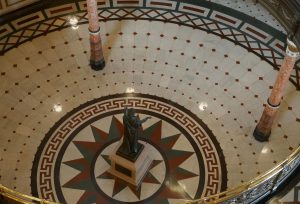 Before returning to the capital, lawmakers are being asked to sign a pledge stipulating they will be tested for COVID-19, regardless of whether they have symptoms or have been previously infected. They will also be required to wear face coverings, undergo temperature checks on session days, travel alone and stay in separate hotel rooms, follow social distancing guidelines and avoid extracurricular activities.

The House will meet in the Bank of Springfield Center, a convention center a few blocks from the Statehouse. The Senate plans to meet in the Senate chamber of the Capitol.

The House is also recommending that lawmakers and staff who are at risk of serious illness from COVID-19 – people over age 65 or with pre-existing conditions – consider not traveling to Springfield for the special session.

Senate President Don Harmon, D-Oak Park, said in a statement that the upper chamber is still working on the logistics of how it will meet, but he said senators are ready to get to work.

“Time and again the Illinois Senate has shown its members can work together to solve problems and produce results for the people of this great state,” Harmon said. “That cooperative spirit of bipartisan achievement is needed now more than ever. This global pandemic has decimated our state and local economies regardless of political affiliation. From far flung living rooms, kitchen tables and home offices, senators have been working together while apart to figure out what we can and need to do now.”

Lawmakers have not met since March 5. They were scheduled to be off the week of March 9-13 to campaign in advance of the March 17 primary. They were also scheduled to take a two-week spring break April 6-17. All other session days since then have been canceled due to the COVID-19 pandemic.

Lawmakers have been meeting remotely in informal “working groups” during the shutdown, mainly to gather information they will need when they return to session, but those working groups were not authorized to draft legislation or hear testimony on bills.

Much of the work ahead is expected to focus on passing a state budget in light of a severe drop in revenues that has resulted from the closure of nonessential businesses, a statewide stay-at-home order and the delay in the state’s tax filing deadline.

Newly revised estimates from the Commission on Government Forecasting and Accountability, or CoGFA, project that total revenues for the current fiscal year, which ends June 30, will be about $2.2 billion lower than the previous estimate released in March. Net income taxes are expected to be $1.7 billion lower than the March estimate.

Revenues for the upcoming fiscal year, which begins July 1, are expected to be $4.7 billion lower than previously estimated.

The state has the ability to borrow money from other funds to shore up the general revenue fund. Officials also will be watching closely to see if the U.S. Congress approves any federal aid for states.

Despite the falloff in revenue, Gov. JB Pritzker has said he wants lawmakers to pass a COVID-19 financial relief bill that will specifically target small businesses that have been unable to access federal relief funds.

“Obviously, as I’ve said for some time now, we have real challenges with the loss of revenue because of COVID-19,” Pritzker said during his daily briefing Wednesday in Chicago, “so we need to rely upon the federal government and its support for all the states in order for us to provide the services that people need, in order to pay for the education that our kids need and for us to support our businesses and our families in the wake of this curve as we’re dealing with this COVID-19 crisis.”

Meanwhile, many legislative Republicans have been calling for weeks to reconvene the session, arguing the governor has no legal authority to extend the disaster declaration beyond the original 30-day time frame, and they hope to put the governor’s authority up for a vote.

“I am pleased the governor and Democratic leaders have heeded our calls to return to the people’s Capitol to address the critical issues facing our state during these unprecedented times,” Senate Minority Leader Bill Brady, of Bloomington, said in a statement. “It is vital the Legislature be a part of the decision-making process when it comes to maintaining the public’s health, reopening our state, moving our economy forward and overcoming a graduated income tax that would negatively impact Illinois families.”

“After two months of inaction, it is about time we get back to the job we were elected to do,” he said.

PHOTO:  The Capitol in Springfield is quiet April 2 as lawmakers and most state employees continue practicing stay-at-home routines as ordered by Gov. JB Pritzker. House Democrats were told during a conference call this morning that the General Assembly will return to Springfield on May 20-22 for three days of session. The House will meet in the Bank of Springfield Center, and the Senate will convene in its chamber at the Capitol. (Capitol News Illinois photo by Ben Orner)