Lawmakers could return briefly in May to address budget, other critical issues

SPRINGFIELD — Gov. JB Pritzker unveiled a plan Tuesday for the gradual reopening of the state’s economy on a region-by-region basis, but he suggested it could take several months or even a year before the state fully reopens.

“Until we have a vaccine or an effective treatment or enough widespread immunity that new cases fail to materialize, the option of returning to normalcy doesn’t exist,” Pritzker said during his daily briefing in Chicago. “That means we have to learn how to live with COVID-19 until it can be vanquished.” 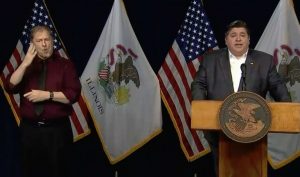 The Illinois Department of Public Health reported 2,122 new cases of COVID-19 and 176 additional virus-related deaths over the previous 24 hours. That represented a sharp increase in daily deaths compared to Monday when only 46 deaths were announced. There were 13,139 tests results reported during that span.

That brings the statewide total for Illinois to 65,962 confirmed cases and 2,838 virus-related deaths since the pandemic first appeared in Illinois. The disease is now been reported in 97 of the state’s 102 counties.

Pritzker outlined the “Restore Illinois” plan that divides the state into four regions and lays out the criteria for each one to move through five stages of reopening.

The four regions are drawn around the Illinois Department of Public Health’s emergency medical service regions. They include a northeast region, primarily Chicago and its surrounding suburbs; a north-central region; a central region; and a southern region.

The first phase, known as the “Rapid Spread”, is what all of Illinois was in from mid-March through the end of April. During that phase, a strict stay-at-home order and social distancing guidelines are put in place and only essential businesses remain open.

Beginning May 1, all of Illinois moved into the second phase, “Flattening,” in which the rate of infection among those tested and the number of patients admitted to hospital and ICU beds increases at a slower rate. Illinoisans are directed to wear face coverings when outside the home, and limited outdoor activities like golf, boating and fishing are allowed while observing social distancing guidelines.

Once a region’s infection rates and hospitalization usage begin to stabilize or decline, it can enter the third phase, “Recovery,” in which face coverings and social distancing will still be the norm. But manufacturing, offices, retail, barbershops and salons may reopen to the public, provided they comply with capacity limits and other safety precautions mandated by IDPH. People will also be allowed to gather in public in groups of 10 or fewer.

Once a region reaches the point when 20 percent or fewer of people tested are positive for the disease and the hospitalization rate remains stable or declines over a period of 28 days, it can enter the fourth phase, “Revitalization,” in which public gatherings of up to 50 people are allowed, bars and restaurants reopen, travel resumes and child care and schools can reopen under guidance from IDPH. But face coverings and social distancing will remain the norm during that phase.

The earliest that could happen for any region would be May 29, Pritzker said.

To be cleared for that phase, regions also must demonstrate that testing is available for anyone, regardless of symptoms or risk factors, and that contact-tracing can be completed within 24 hours on at least 90 percent of patients who test positive.

The final phase, “Illinois Restored,” will occur only when a vaccine or highly effective treatment is widely available, or there are no new cases reported over a sustained period. Only at that point will a region’s economy fully reopen, including public festivals and large gatherings, businesses and schools, although safety precautions will continue.

“It brings me no joy to say this, but based on what the experts tell us and everything we know about this virus and how easily it spreads in a crowd, large conventions, festivals and other major events will be on hold until we reach Phase 5,” Pritzker said.

Pritzker also said the General Assembly might begin meeting before the end of May to address a handful of critical issues, including the state budget.

“This is a big state and representatives come from all over the state, hours away, so it may be very difficult to do a lot during the month of May, and certainly while we’re in a stay-at-home order and need to remain in this order,” he said.

According to the latest revenue reports, lawmakers might have a bigger budget hole to fill when they return than was initially feared.

The Commission on Government Forecasting and Accountability, or CoGFA, reported that base revenues in April came in $2.6 billion lower than the same month last year, largely because the state pushed the income tax filing deadline from April 15 to July 15. CoGFA also reported that total revenues so far this year are now $1 billion below last year’s level, with two months remaining in the fiscal year.

Asked when he plans to release concrete details of the budget adjustments he will recommend, Pritzker said he is working with members of the General Assembly.

“I know they have plans, thinking about getting together in May, and so my hope is that we’ll be able to work together on a budget for the year,” he said. “This is clearly the most unusual budget that anybody will have ever seen, because who has ever seen — at least in our lifetimes — the drop-off of revenue because of a pandemic? And so there’s no doubt there’s going to have to be a lot of collaboration, even across the aisle, to get things done.”