SPRINGFIELD — As the state saw its largest single-day death total yet from COVID-19 on Tuesday, Gov. JB Pritzker said his stay-at-home order stands despite a judge’s Monday ruling granting a limited temporary restraining order against it.

“Let me remind everyone again — the stay-at-home order in Illinois is still very much in effect,” Pritzker said. “All of us must maintain social distancing, wear masks in public, and keep non-essential businesses closed until we can lower our still increasing hospitalizations and lower ICU bed use the danger has not passed yet, no matter whether you live in little Egypt or in Freeport, or in Quincy, or in Chicago.” 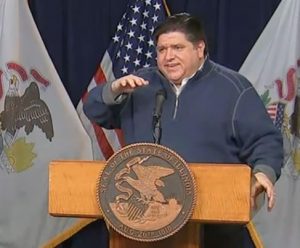 While an appeal awaits and it is possible that the ruling sets a precedent affecting more people than Bailey, Pritzker said it does not immediately affect his order.

“This ruling only applies to one person, because it was only ever about one person,” Pritzker said. “…While the court’s order is limited, the risk it poses is significant by agreeing with the plaintiff in this initial ruling the court set a dangerous precedent.”

Pritzker said “slowing the spread of this virus is critical to saving lives by ensuring our healthcare system has the resources to treat patients who get sick,” and he pointed out that Bailey’s 109th state House district “happens to have among the lowest hospital bed availability and ventilators in the state, making it uniquely ill equipped to respond to a surge in cases.”