Governor says all decisions go through Prisoner Review Board

SPRINGFIELD – Illinois Senate Republicans are calling for greater communication from the governor’s office when he commutes prison sentences, but Gov. JB Pritzker has not indicated he will make any voluntary changes to the process, which is spelled out in state law and also goes through the state Prisoner Review Board. 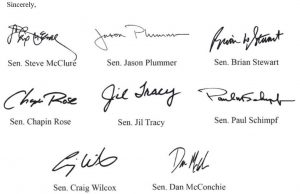 The Chicago Tribune reported Pritzker commuted 17 sentences between March 11 and April 9. Another two commutations were conducted on April 13, according to the Prisoner Review Board.

“We have learned through the media that you have reduced the sentences of some violent criminals, including seven or more convicted murderers,” eight Senate Republicans wrote in a letter to the governor on April 16. “We are concerned that you have done so without informing the victims, their families, witnesses who testified against them, local law enforcement leaders, the judges who decided their sentences, or members of the General Assembly. Are all of these commutations because of the COVID-19 crisis? We believe that the public deserves to know.”

Pritzker did not directly respond Saturday to a question as to whether recent commutations were related to the COVID-19 pandemic.

The Illinois Constitution states, “The Governor may grant reprieves, commutations and pardons, after conviction, for all offenses on such terms as he thinks proper. The manner of applying therefore may be regulated by law.”

Pritzker pointed out Saturday that all cases also go through the Prisoner Review Board process.

“So I just want to be clear that those go through the PRB,” he said. “So they actually have a presentation of each case at the PRB, they vote on those cases before they ever get to my desk.”

The review board is an independent body made up of members appointed by the governor. Itimposes release conditions, revokes and restores good conduct credits, and conducts parole hearings. It also notifies victims and their families when an inmate is about to be released from custody and makes confidential recommendations to the governor regarding executive clemency petitions.

But the Senate Republicans said the information about releases from prison should be publicly viewable in an online database and Pritzker should personally reach out to victims’ families, local law enforcement leaders, members of the General Assembly, presiding judges, witnesses, and state’s attorneys’ offices “before making any future commutation decisions.”

“We don’t even know everyone that they’re releasing,” Springfield Republican Sen. Steve McClure, who co-signed the letter to the governor, said in a phone call. “So we are not even getting the information. It is not just something that we need so that we know whether or not this is the right thing to do, but also for the safety of the public, particularly … victims, people who testified against these people.”

House Republican John Cabello, of Machesney Park, was also critical. He accused the governor of undermining the criminal justice system in “an unbelievable attempt to protect these prisoners from the coronavirus” as he released the names of 13 recently released prisoners last week.

Prison reform and civil rights groups, however, have praised the actions on medical furloughs and commutations and even called for greater release of at-risk prisoners in response to the COVID-19 pandemic.

“Releasing prisoners from these settings improves safety for other detainees, people who work in the corrections system as guards and administrators and also helps protect the communities where Illinois prisons are located,” Colleen Connell, executive director of the ACLU of Illinois, said in a statement. “The people who are being released have served time – some of them years. The release of these names is not another opportunity to create faux outrage and perpetuate a criminal legal system that too often confuses being tough with being smart.”

The Pritzker administration also faced a lawsuit from civil rights activists seeking the release of thousands more prisoners due to health concerns earlier this month, but a judge denied the request to intervene.

In a Thursday news conference, Pritzker said there are “two methods that we’re following for thinking about release.”

“One is the director of the DOC, the Department of Corrections, has the ability on his own to determine that someone can be released and it’s the criteria that he’s using is non-violent convictions and people who have already served a substantial portion of their term or have a comorbidity or something that makes them especially vulnerable,” he said, adding that it is essential that the person would not pose a risk to the community.

Pritzker did not have an exact number of releases Monday at his daily briefing but said there were 1,300 fewer persons incarcerated than at the beginning of March for various reasons the last time he checked.

A spokesperson for IDOC said later Monday, “The department’s efforts to return people to their communities has led to either the release or home confinement of more than 760 people, and this work is continuing. To reach this number, the department is exercising the legal procedures available while placing an emphasis on maintaining public safety.”

Pritzker said the second method for release is appeals to the governor for clemency.

“And those often are the more difficult cases. These are often people who may have committed a violent crime but it may have occurred many, many years ago, they may have served, for example, decades of a term,” Pritzker said, adding he makes decisions in consultation with Lt. Gov. Juliana Stratton and legal counsel.

Asked if the governor was considering adopting some of the procedures suggested by the GOP senators and whether more commutations are in the works, Pritzker’s spokesperson said only, “The governor has clemency powers granted to him via the state Constitution. The administration has followed all appropriate procedures.”

In their letter, the Senate Republicans specifically mentioned Alma Durr, a mother who was charged with killing her 21-month-old son in 1996 after allegedly using crack cocaine. She was serving a life sentence before it was commuted with nine others on April 7. They alleged that Durr was leaving a prison that had no prisoners confirmed to have COVID-19.

McClure said it and another case regarding the murder of a child that was in youth protective services stood out as hypocritical and dangerous when compared to the governor’s previous public comments on reforms needed to the Department of Children and Family Services.

“It just doesn’t make any sense, particularly when the governor seems to be so outraged over DCFS cases,” McClure said.

The John Howard Association, an independent prison reform group, released a statement Friday with the Cook County Public Defender’s Office saying commutation decisions should be based on “research and data, not politics and emotion.”

“Full consideration of all of the public health ramifications of this deadly disease inside prisons makes clear that each person released from prison represents an opportunity to save not one life but many lives,” they said in the statement. “Categorically excluding people who have demonstrated their rehabilitation and do not present a threat to society from consideration for release solely due to the offense they were convicted of committing many years prior has long been recognized by experts as an ineffectual and ill-chosen approach to maintaining public safety.”

The statement said Pritzker’s commutations and executive orders to expedite early release of some prisoners “are steps in the right direction that must be encouraged and increased for everyone’s safety and well-being.”

The other Republicans who signed the letter are Jason Plummer, of Edwardsville; Brian Stewart, of Freeport; Chapin Rose, of Mahomet; Jil Tracy, of Quincy; Paul Schimpf, of Waterloo; Craig Wilcox, of McHenry; and Dan McConchie, of Hawthorn Woods.