House Republicans say more should be done to handle volume of calls, applications

SPRINGFIELD – Gov. JB Pritzker said Monday that his administration is stepping up efforts to keep up with the flood of unemployment applications coming into the Illinois Department of Employment Security as the state is seeing a record number of claims being filed by people left jobless due to the COVID-19 pandemic. 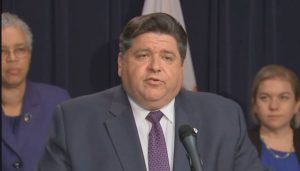 “The unemployment claims process has been a source of hardship for all too many Illinois residents as it has been for dozens of states across the nation,” Pritzker said during his daily news conference in Chicago. “So many families are hurting at a scale of this country hasn’t seen ever in our lifetimes, and our state. Unemployment filing systems which were built a decade ago, for a much lower number of claims, simply haven’t kept pace.”

Pritzker made his comments as the Illinois Department of Public Health reported 1,173 new cases of COVID-19 during the previous 24 hours and 74 additional deaths. That brings the total for the state to 22,025 cases, including 794 deaths, in 87 counties.

Pritzker said that since March 1, IDES employees have put in 6,500 overtime hours and they have processed and paid out more than 270,000 claims totaling $200 million in benefits. The agency, however, has reported receiving more than 500,000 initial claims during that period.

IDES also recently began hiring back retired employees, although they are given laptops and assignments that allow them to work from home because many of them are in a vulnerable category.

The agency is also establishing an outside call center with an additional 200 agents who will help in the application and certification process, Pritzker said, while it has also upgraded its online platform to handle more volume and waived some of the normal verification checks that applicants normally go through.

Pritzker made those comments just hours after Republican House leaders held a video news conference to criticize the administration for not being better prepared for the onslaught of unemployment claims that ensued after Pritzker ordered nonessential businesses, including restaurants and bars, to close in order to slow the spread of the disease.

Also on Monday, the Illinois Workers Compensation Commission announced it has adopted an emergency rule that gives “front-line workers” such as medical staff, first responders, grocery store employees and certain others who contract COVID-19 a rebuttable presumption that they caught the disease at work and are therefore entitled to workers’ compensation insurance.

A coalition of business groups issued a joint statement criticizing the order, saying it will result in higher costs for businesses at a time when many of them are under severe financial stress.