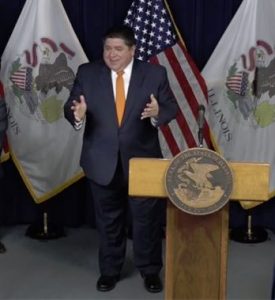 Both cases and deaths once again saw their largest single-day spikes, but Illinois Department of Public Health Director Dr. Ngozi Ezike said at the daily COVID-19 briefing in Chicago that the rate of increase in cases from day to day is beginning to decline.

“You’re not seeing the exponential growth that we were seeing before,” she said. “But even as there may be some glimmers of hope, I say that physical distancing has to — must — continue to be the way that we reduce the spread of this virus. Please stay home.”

She said a decrease in the rate of rise, which now looks more linear than exponential, was promising, but she could not predict how many days the state is away from a peak in cases, which could last several days once it is hit.

“So we’re, with guarded optimism, we’re hoping that we’re getting close to either the peak or the plateau. It’s not clear yet how long that would be,” she said.

The latest deaths came in 11 counties — Boone, Cook, DuPage, Kane, Lake, Macon, Madison, McHenry, St. Clair, Tazewell and Will — with 61 of them in Cook County. The deaths came in people from their 30s to their 90s.

There are now 15,078 total confirmed cases in the state in 78 counties, including 462 deaths. The state tested 75,066 persons for the virus as of Wednesday, an increase of about 6,300 from Tuesday.

Pritzker said testing capabilities just reached the 6,000-daily threshold in Illinois, which is still short of the 10,000 target set by health officials. According to medical and scientific experts, he said, processing 10,000 tests per day will give officials the clearest picture of how many confirmed COVID-19 cases are in the state and how it is spreading.

The hold-up, Pritzker said, is due to “new laboratory automation machines” manufactured by Thermo Fisher Scientific, which originally promised to process a “multi-thousand daily unit increase” of tests, or about 200 hourly. But those five machines — distributed to Illinois’ three state-run labs — are not giving technicians “the level of output that we want to see,” the governor said.

“More importantly, these tests are not producing valid results in a way that meets our exacting standards,” Pritzker added. “I am as impatient as the rest of you are, wanting to increase testing, but I will not sacrifice accuracy for the sake of speed. The tests and results they will provide are too important.”

Until those machines are operating correctly, the governor said, they will not be used to examine Illinois tests.

He also said the state could increase testing output through privatized labs used by the federal government, but those labs turn around test results in 7-10 days, as opposed to state labs and local hospitals which can produce results in two days.

“People can end up on a ventilator before they ever get their testing result. That’s just not a timeline that I want to bet on,” he said of privatized tests.

Pritzker said the state is working with “the scientists and technicians, the academics and innovators here in Illinois, to expand our test results.”

He said state labs are running three shifts to increase results, and 96 locations across the state are now collecting specimens.

“To ensure a steady stream of supplies our in-state universities and local laboratories are creating our own raw materials, instead of relying upon the global supply chain, which is frankly in disarray,” the governor said, noting they are creating certain parts of testing that hospitals and labs will be able to now access locally rather than waiting on purchased supplies to arrive.

Pritzker said Abbott Labs dedicated the supplies for around 3,000 rapid, 5-minute response testsper day in Illinois, but he noted the federal government “redirected most of these early tests to private systems without our state input about where the tests would make the most impact.”

He added that the federal government provided state labs with 15 Abbott ID now machines, but only 120 total tests.

“That’s eight tests per machine for all of Illinois, but I assure you that we will leave no stone unturned to get the tests that we need to run those machines at full bore,” he said.

On another testing note, Ezike said the U.S. Food and Drug Administration authorized a test which detects antibodies from the virus in those who have already had it.

“Antibody tests will play a critical role in the fight against COVID-19 by helping with identification of people who have actually overcome an infection and have developed the immune response,” she said. “Results from antibody testing will identify individuals who we assume will be no longer susceptible to the infection and can return to work. This test could also help determine who may donate plasma, plasma being the liquid component of blood that could serve as a possible treatment for those who are seriously ill from COVID-19.”

-Illinois National Guard Adjutant General Richard Neely said at the news conference that as of Wednesday, there are 575 National Guardsmen engaged across the state supporting the COVID-19 response.

Those efforts range from operating testing facilities and augmenting emergency operation centers, to support of Stateville Correctional Center, which has seen an outbreak of the virus, to assisting in the buildout of an alternate care facility in Chicago.

-The governor was asked by members of the media how he felt when considering that some businesses affected by the stay-at-home order might never reopen.

“It’s devastating for the people who closed their businesses,” he said. “It’s devastating for the people who worked at those businesses. I hope that those shops will not close forever. I hope that the small business loans that we’re offering in the state of Illinois, that the small business support that’s coming from the federal government, will allow those businesses to survive to reopen when it’s time.”