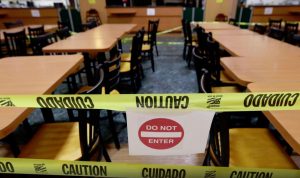 While Illinois leaders take action to prevent the spread of the COVID-19 virus, businesses around the state have temporarily closed or reduced production in order to protect their employees and customers.

Original analysis by the nonpartisan Illinois Policy Institute found industries most affected by social distancing and shelter-in-place safety measures contribute more than $100 billion to the state’s annual economic activity and employ 24 percent of all Illinoisans. That means nearly 1.5 million Illinoisans are at risk of losing their jobs or facing reduced hours during the global outbreak.

Meanwhile, businesses directly affected by COVID-19-mandated shutdowns, such as arts, entertainment, recreation, accommodation and food service companies, generated more than $37 billion for Illinois’ economy in 2019, or an average of about $103 million per day.

Experts from the nonpartisan Illinois Policy Institute are available for phone, video or in-person interviews to weigh in on various aspects of the economic fall-out and recovery from COVID-19.

Original Illinois Policy Institute findings:
• Illinois could see from $54 billion to as much as $113 billion in reduction to the state’s economy. This is based on an economic decline of 24 percent  to 50  percent in the second quarter, which were the high-end and low-end estimates projected by Goldman Sachs and the Federal Reserve Bank of St. Louis. Illinois’ annual gross domestic product is about $902 billion.
• Small businesses play a vital role in Illinois’ economy as prolific jobs creators and could be the most profoundly affected by the pandemic. More than 77 percent of businesses in Illinois are small businesses employing fewer than 50 employees.
• Illinois’ economic activity declined by 5.25 percent real gross domestic product during the Great Recession, according to Bureau of Economic Analysis data. The decline occurred during an 18-month period. A similar decline in Illinois’ economy today would represent a $47.4 billion retraction in the economy, in a much smaller time frame.
• Low-income households will be hurt the most by the outbreak and measures taken to contain it. Not only do these families face more constrained budgets, they are more likely to work in the industries most susceptible to the downturn, compounding the economic fallout.