Officials still hopeful the shows will go on this summer at county, state fairgrounds

SPRINGFIELD — The social distancing guidelines that led Illinois county fairs to cancel off-season events on their grounds through the end of April is one part of a financial impact double-whammy, a trade official said.

Many local fairs use revenue from off-season events and activities to “pay the bills,” said Ken Tyrrell, president of the state’s Association of Agricultural Fairs.

Guidelines from Gov. JB Pritzker’s office regulating the number of people allowed to congregate shrank over the past few weeks from 1,000 to 50 to, finally, 10. County fairs canceled expositions, contests and other events back when that number was 250.

The other problem, Tyrrell said, is a delay in reimbursements from the comptroller’s office for costs incurred last year. Under statute, the state is responsible for paying county fairs 66.67 percent of what organizers spent on agricultural premiums. That includes activities related to horticulture, poultry, livestock, horse races and rodeos.

Tyrrell said fair organizers “have never received that” — in recent years, they were reimbursed 25 percent of eligible costs.

“That’s beginning to hurt a lot of fairs in the state of Illinois. We’re told it’s been at the comptroller’s office since December,” he said. “Possibly if the state would pay their bills, it would really help fairs.”

A spokesperson from Comptroller Susana Mendoza’s office did not return a request for comment by time of publication.

County fairs in Illinois begin hosting their main events in June. If the novel coronavirus pandemic continues into the summer, forcing fairs to begin cancelling, Tyrrell said “it would be devastating.”

If a fair is canceled, expected revenue needed to pay laborers to maintain the grounds is lost, for example. Marla Calico, president of the International Association of Fairs & Expositions, added they additionally would lose vendor deposits and presale ticket money.

“Many downstate fairs struggle getting along as it is. They don’t have money put away or deep pockets. All of them struggle,” Tyrrell said. “Any time you lose revenue, it’s going to affect the fair.”

According to IAFE data, most county fairs across the country are scheduled for July, but events largely begin in June, extend strongly into August and wind down in September.

Member county fairs told Calico “they are taking a wait-and-see attitude,” choosing not to close unless forced to do so by public health authorities because “many times, they are the single largest economic driver in the community.”

She said county fair cancellations would cause “an entire ripple effect.”

“It’s not just the funds that not-for-profit organizations may gain and do good within the community when they give out scholarships to young people,” Calico said. “It’s the small businesses all around them — the gas station benefits, the hotels benefit, the cafes and restaurants benefit.”

According to a study commissioned by the IAFE, fairs in the U.S. are estimated to generate $4.67 billion in economic activity annually. A survey of the association’s members found that number is already down $66 million due to 320 fairs forced to shut down 10,578 events thus far this year.

Events at the Illinois State Fairgrounds have been canceled through April, While Kevin Gordon, Illinois State Fair manager, said in a written statement that will have a financial impact, “our priority, first and foremost, is the health and safety of those individuals holding, and attending these events, along with our department support staff.

He added the Coliseum’s renovation and reopening means more events than typical over the past few years had been scheduled and subsequently called off.

“Our staff is working diligently to reschedule any shows that have been canceled by this temporary closure,” Gordon said in the statement. “Once we get through this uncertainty that we are all facing, we are anticipating another great spring and summer of events on the Illinois State Fairgrounds.”

Tyrrell is the vice president of the Sandwich Fair’s board in northern Illinois’ DeKalb County, one of the largest in the state in terms of fair entrants. He said county organizers of summer events have not yet discussed fair cancellations, and also are taking “a wait-and-see attitude.”

“I’m being optimistic, and I’m thinking this will take care of itself by the first of June,” he said. “The main concern right now is that we’ve lost revenue from cancelling off-season events and lost revenue, and the state of Illinois not paying us what we’re entitled to.”

“Fairs have been around since before the founding of the country, so it’s something I believe is really a part of America,” Tyrrell continued. “As I said, I think we need to calm down and I have all the faith in the world we’ll have a fair season this year.”

Fairgrounds across the country that cleared their spring calendar are being repurposed to assist in the COVID-19 effort, Calico added. Grounds in Ohio, Missouri and Washington are operating drive-through testing facilities and one in West Virginia is using its indoor facilities to house community partners to package meals for school children.

“The Illinois State Fairgrounds and many other locations throughout the state have been identified as possible future community based drive-thru testing sites,” a spokesperson for the Illinois Management Agency said in an email. “However, further evaluation is needed before any decisions can be made.”

“Our members are going to step up to the plate — that’s what they do,” Calico said. “Each and every single one of us is a citizen of this world and must do what we must do to protect our family and neighbors.” 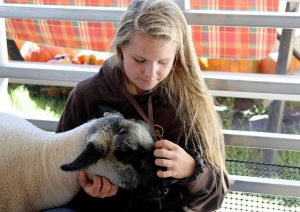 McKenzie Hamer, a member of the Newark FFA, spent some time with a crossbred sheep at the FFA Petting Zoo during the Sandwich Fair, Sept. 4, 2019, in Sandwich. The fair board’s vice president, Ken Tyrrell, is also president of the state’s Association of Agricultural Fairs. He’s concerned about the revenue fair boards already are losing because of events and activities at fairgrounds that have been canceled because of coronavirus concerns. He said he’s optimistic the outbreak will subside in time for the summer’s county fairs to go on as scheduled. (Photo by Shea Lazansky of Shaw Media)