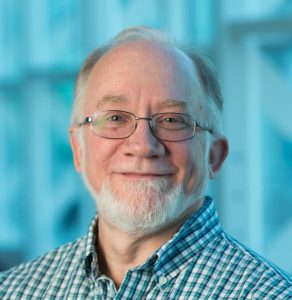 Umbaugh is a prolific researcher known worldwide for the development and implementation of application software in medical imaging, satellite imaging, manufacturing, agriculture and robotics.

Subsequent to his promotion as professor, Umbaugh has been principal investigator of grant funding totaling $1,092,561, the majority of which has been external funding to support his research and development for computer vision and image processing applications.

“Dr. Umbaugh’s CVIP software has a vast number of downloads to institutions worldwide, which includes prestigious research institutions and labs in the U.S. and abroad. This speaks volumes about the level of his research work and its application,” said Jerry Weinberg, PhD, associate provost for research and dean of the SIUE Graduate School. “Dr. Umbaugh’s research raises awareness of SIUE globally and helps in the recruitment of excellent graduate students to our high-caliber engineering programs.”

Since becoming full professor, Umbaugh has authored three editions of a textbook on digital image processing and analysis. He has also authored or co-authored 13 journal papers and 17 conference papers, many of which have been co-authored by SIUE graduate students.

“Our research is challenging and fulfilling,” Umbaugh said. “I take great joy in mentoring students in research and development, and involving them in its dissemination. It has been a particular honor and privilege to mentor 12 Competitive Graduate Award winners over the past 13 years, and I believe their contribution to our research has been exceptional.”

According to Umbaugh, the SIUE Computer Vision and Image Lab has developed software used worldwide for research and development, as well as education and in commercial applications. Mirror sites have been established in Europe and Asia, and more than 80 SIUE students have been directly involved in the software development. Applications developed in the CVIP range from dermatology, eye fundus, satellite image classification and veterinary areas to an embedded system for use in the AgroDat project in Hungary, sponsored by a European Consortium and Hewlett-Packard Information Technology.

“I look to the future with excitement for the continued research and development in the SIUE CVIP Laboratory, and the new research areas that will be created as a result of our CVIPtools software environment expansion” Umbaugh noted. “My new edition of the Digital Image Processing and Analysis textbook, with its chapter on research applications, will expose our CVIP lab and SIUE to new researchers worldwide.”

Strong support of Umbaugh as a deserving DRP candidate poured in from colleagues around the globe, underscoring the plentiful evidence of his research success and noting his international recognition.

“Dr. Umbaugh and his research team have made great strides toward developing effective new pre-screening protocols for detecting animal pathology,” said Dominic Marino, DVM, co-founder and chief of staff of Long Island Veterinary Specialists. “We are greatly pleased to be the first veterinary hospital in the country to use the thermographic image analysis software developed by Scott Umbaugh and his team at the SIUE Computer Vision and Image Processing Laboratory. It has been recognized as one of the most innovative and useful tools for diagnostic pre-screening in veterinary clinical settings. Dr. Umbaugh’s work has been broadly influential in the fields of engineering and medical image processing.”

“Of particular merit is the fact that a good number of students have been directly involved in the development of the SIUE CVIPtools software,” added Jose Luis Sevillano, PhD, professor in the Department of Computer Architecture and Technology and director of the Technical School of Computer Engineering at the University of Seville in Spain. “This shows Dr. Umbaugh’s outstanding ability to lead top-level teams of students and researchers, as well as his commitment to support younger faculty and students.

SIUE ECE Chair and Professor Andy Lozowski emphasizes Umbaugh as an influential mentor both for students and colleagues.

“Dr. Umbaugh has served on numerous promotion and tenure proceedings for our faculty,” Lozowski explained. “He never refuses such service and has been instrumental help for younger faculty writing their dossiers, including myself. His help comes as a confidence builder for them, with added ingredients of common sense and reassurance. His mentorship is influential, because other faculty see him as a highly established expert with written books, substantial research funds and international reputation.”

Prior to joining the SIUE faculty, he worked for McDonnell-Douglas in St. Louis, ITT North Research Laboratory in Columbus, Ohio, and Microtel, Inc. and Affinitec, Inc. in St. Louis.