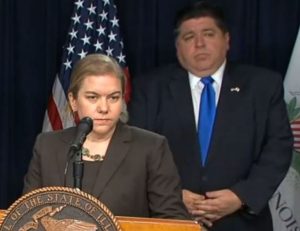 Illinois recorded its first death from the novel coronavirus disease, COVID-19, on Tuesday as the number of confirmed cases in the state rose to at least 160, spread across 15 counties.

The patient, who lived in Chicago and was being hospitalized for the illness, was described as a woman in her 60s who had underlying health conditions and had been in close contact with another affected person.

“I want to extend my condolences to her family members,” Gov. JB Pritzker said during his daily briefing in Chicago on the epidemic. “I want them to know that the entire state of Illinois mourns with them. May her memory be a blessing.”

Pritzker also announced that an outbreak had been detected at a DuPage County long-term care facility where a resident had tested positive for the virus last week. Since then, 17 other residents and four staff members of that facility have tested positive.

“All of the individuals who have tested positive are now isolated at the facility or at a hospital, and visitors have been restricted,” Pritzker said.

State public health Director Dr. Ngozi Ezike warned that additional outbreaks might occur at other long-term care facilities and she issued updated guidelines for nursing homes. Those guidelines include: restricting all visitation except in certain cases such as end-of-life residents; restricting all volunteers and non-essential health care personnel such as barbers; canceling all group activities and communal dining; and implementing active screening for all residents and health care workers for fever and respiratory symptoms.

Those developments came on the first full day in which all K-12 schools in Illinois were closed while bars and restaurants were restricted to drive-through, curbside pickup or delivery service. Those restrictions are scheduled to remain in place through March 30.

In addition, the Illinois Secretary of State’s office said the Capitol and the Stratton state office building will be closed to the public starting Wednesday. Non-state employees will have to be escorted by a state employee to enter either building.

Dr. Allison Arwady, Chicago’s public health commissioner, called those measures necessary, but said the number of confirmed cases is still expected to grow steadily in the coming days, in part because more people are being tested for the virus.

“The aggressive containment measures that we’ve been talking about, and that all of you have been taking, will not show up in the numbers today, or tomorrow, or in the very short term,” she said. “These measures that we’ve taken are about bending the curve over the long term.”

Tuesday’s developments also came on the day of Illinois’ primary elections as polling places throughout the state had to operate with extra precautions.

Those elections appeared to be going smoothly in most parts of the state, except Chicago where the Chicago Tribune reported some voters were turned away from their polling places amid “extremely low turnout.” The Chicago Board of Elections chairman openly criticized the governor Tuesday for refusing its request to convert the election to an all-mail ballot election and extend the voting deadline to May 12.

“It was a snowball we could all see coming down the hill,” Chicago elections board chairman Jim Allen told reporters Tuesday, according to the Chicago Sun-Times.

But Pritzker fired back during his briefing, arguing that he did not have the legal authority to do what the board had asked and that the board had not shown that all election jurisdictions in the state could effectively convert to an all-mail ballot election for May 12.

“It is exactly in times like these when the constitutional boundaries of our democracy should be respected above all else,” Pritzker said. “And if people want to criticize me for that … well, go ahead. I’ll wear it like a badge of honor.”

Pritzker also stepped up his criticism of the federal government’s response to the pandemic, saying it has been slow to release testing kits and related medical supplies to the states.

“My team and I have been on the phone day and night communicating with the medical testing supply chain, but the federal government is monopolizing supplies and not providing them to the states,” he said. “They set deadlines and they blew through them.”

“This is an incredible failure by the federal government and every day that they continue to abdicate their responsibilities is another day that we fall behind,” he said. “I’ve requested and now I’m demanding that the White House, the FDA and the CDC produce a rapid increase in test deployment nationwide, or get out of the way and allow us to obtain them elsewhere ourselves.”

There was, however, some good news for Illinois from the federal government. U.S. Sens. Dick Durbin and Tammy Duckworth, both Democrats, announced Tuesday that the Illinois Department of Public Health had received $14.6 million in federal funding to respond to the pandemic, and the Chicago Department of Public Health had received another $8.7 million.

That money comes from an $8.3 billion federal funding package to combat the coronavirus that Congress approved two weeks ago.

Illinois Attorney General Kwame Raoul said during the briefing that his office has been aggressively investigating reports of alleged price gouging on certain products in stores and of illegitimate offers of products to cure or treat COVID-19.

“Let me be clear,” Raoul said. “I will use all the powers and tools available to my office to address price gouging in Illinois. The governor has set forth authority for my office to take action, if necessary, for any unreasonable increase in price of medical supplies, protective equipment, medication and other goods and services connected to COVID-19. We will also utilize our authority under the consumer fraud act to address any unfair pricing practice related to other products that is prohibited under the law.”

He also warned the public not to believe ads or buy products that are marketed as cures or treatments for COVID-19.

“These claims are absolutely false,” he said. “The (U.S. Centers for Disease Control and Prevention) has said that there is currently no vaccine to prevent COVID-19 or no medication approved to treat it at this point. People should ignore such online ads, delete email solicitations and report any scams.”

Finally, Raoul addressed the issue of people buying excess supplies of things such as toilet paper, paper towels and other products that have been disappearing off the shelves of supermarkets throughout the state.

“I want to implore people to act as one Illinois, to think of their neighbors, the elderly and others who are vulnerable and encourage everyone during this trying time to buy only what they need,” he said.

Illinois teachers and other public school employees will continue to be paid while schools are closed and they will not have to use vacation days or sick leave to account for their absence.

Instead, the days off will be counted “Act of God” days and employees will be paid as if they were performing normal duties

That was part of a deal announced Tuesday between the state’s two major teachers’ unions and associations representing school administrators and principals that was negotiated by the Pritzker administration and the Illinois State Board of Education.

School employees may, however, be asked to perform some work-related duties during the period although details of that work will have to be negotiated through mutual agreement.

“These are unprecedented times, but we are all together with the goal of caring for students,” the groups said in a joint statement. “Our organizations are truly inspired by the phenomenal cooperation shown across the state and encourage all of our members to be reasonable, creative, and generous while determining what’s best for our students in Illinois.”