With a potentially giant investment in rehabilitation of major Downtown Alton properties on the horizon, new attention is being paid to smaller buildings that fall in between.

Alton Main Street has rolled out a facade grant program designed to assist property and business owners with rehabilitating the facades of their buildings to create a positive visual impact, stimulate private investment and complement other community development.

“A small facade program like this is a gateway so that people can understand more what other incentives and financial assistance exist,” said John Gajewski, chair of Alton Main Street’s Economic Vitality Committee, himself an internally recognized historic preservationist.

Some $2,000 is available to be awarded in grant funding for the initial round, which the organization hopes to repeat in the future. Grants are required to have a one-to-one match.

Improvement projects that are eligible to receive the grant include, but are not limited to: storefronts, exterior painting, signage, awnings and accent lighting.

Gajewski notes there is also the availability of historic tax credits as well as the city of Alton’s own façade improvement program for those owners wanting to go deeper into rehabilitation.

The ultimate aim is to help bring back retail spaces and living spaces above those retail spaces, just as AltonWorks is doing on a much larger scale along the Broadway corridor.

“We’re making a small impact with our façade program, but perhaps we’ll assist those who might not be affected by the AltonWorks projects,” Gajewski said.

AltonWorks hopes to lure investment of $75 million to $100 million during the next decade on some of downtown’s most significant landmark buildings, helped along by a pledge of seed funds from attorney John Simmons and his wife Jayne. The campaign has been well-publicized during the last year and involves such buildings as the Grand Theater, Hotel Stratford, the old YMCA, the Jacoby Arts Center and many others that the Simmonses have acquired under the AltonWorks umbrella.

Interested property owners as well as tenants with owner’s permission are eligible for the program. In order to be eligible, buildings must be located within the Alton Main Street district boundary, bordered roughly by Landmarks Boulevard, William Street, Belle Street, Ninth Street, Piasa Street, and Broadway from Downtown to Pearl Street.

“This is a carrot that can be dangled in front of people who have thought about doing something to their building but need a little extra incentive,” McGibany said. 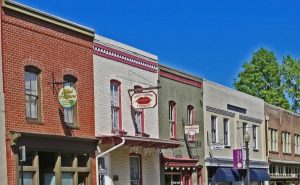 The city has a much larger TIF-funded façade improvement program that covers up to 25 percent of the cost of a project. The Main Street Façade Improvement Grant Program could be used in conjunction with the city’s or either of the programs could be done independently of the other.

“Alton Main Street can assist applicants with learning about the city of Alton’s façade grant program, which could potentially be an additional source of funding,” said McGibany. “We would be happy to provide introductions to historic preservationists and other professionals to advise them on their project.”

Main Street’s initial round of $2,000 is a pilot to see what kind of interest is out there, she said.

“If it takes off, and we’re able to subsidize with more fundraising or corporate sponsorship, we plan on doing additional phases in the future,” McGibany said. “Ideally, one in the spring and the fall.”

Gajewski is a reputable resource for Main Street’s program.  Today, he is a businessman in Jersey County, specializing in historic preservation, commercial building consultancy and construction project management.

He’s also a member of the Royal Institution of Chartered Surveyors, a very old British institution. He has advised big corporations and local governments and done work on the Houses of Parliament and the prime minister’s residence at 10 Downing St. in London.

He is married to a Jersey County native and has connections to this area going back 20 years. Three years ago, the couple moved back to the states.

“My professional career has been centered around historic buildings, commercial property and historic preservation,” Gajewski said. “The Main Street organization on the national level was something I’d always admired from afar. I think the Main Street movement has it right — community and economic development that spurs downtown revitalization and historic preservation. I think it’s an awesome model, and I just wanted to get involved.”

He said he didn’t know McGibany or any of the individuals involved in Alton Main Street, “but I made a point of doing so.”

What Alton is doing right now, he said, “is creating places people care about, places they want to be and places they want to invest in. It has an impact on how people look after their buildings and it’s a sustainable model. We’re looking at supporting entrepreneurship and building reuse, bringing buildings back on line that have been empty a while.”

Research has shown that exterior building improvements result in an increase in sales. Additionally, improvements motivate owners and tenants of other properties in surrounding areas to make similar investments.

The organization’s goal is to provide an incentive that encourages improvements to building exteriors that are visible from public streets and sidewalks.

An example of recent façade work is Rushmore, a new boutique clothing store in the 100 block of Broadway, McGibany said. Several other businesses have redone signage and awnings in recent years.

The goal of the new program is to help make sure that no one slips through the cracks as other work is going on around them.

“It’s a brand-new project for us, but it’s been tried successfully in many other Main Street communities,” McGibany said.

Although no one has yet applied for the program, one awning company has reached out to the organization to offer a discount, she said.

McGibany said applications will be accepted through April 15.

“We’ll make a decision by May 15, and the projects would have to be done within six months,” she said.

To download an application, visit www.DowntownAlton.com, and click “Doing Business” then “Resources.” For more information or Alton Main Street at (618) 463-1016 or sara@altonmainstreet.org.

This story originally appeared in our March print edition, which you’ll find under Current Issue at ibjonline.com