SPRINGFIELD – State revenue officials said Thursday that tax collections have been coming in about as expected so far this fiscal year, and they predict modest revenue growth in the fiscal year that begins July 1. 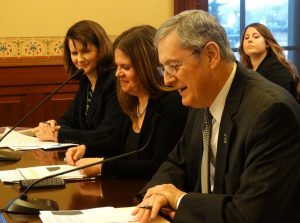 That new estimate is essentially the same as earlier estimates upon which Gov. JB Pritzker based his latest budget proposal. Overall, according to the report, the state should see about $40.7 billion in revenue from both state and federal sources. That’s an increase of about $656 million, or 1.6 percent, in base year-over-year revenues.

And if voters in November approve a constitutional amendment to allow for a graduated income tax, where people are charged higher rates on higher levels of income, Illinois could see an additional $1.4 billion during the last six months of the fiscal year, bringing the total to $42.1 billion.

Even without the constitutional amendment, individual income taxes are expected to grow about 3.5 percent, to $20.1 billion.

Marty Johnson, chief economist for the Department of Revenue’s Research Office, said wage growth in Illinois has been sluggish in recent years, compared to the national average, but she said the current tight labor market, combined with the state’s higher minimum wage, should push wages up in the coming year.

“So certainly, wages and salaries are moving in the right direction,” she said. “We will see that in our forecast for both income taxes and sales taxes.”

Sales tax receipts are projected to grow 3.4 percent, to just over $9 billion, while corporate income taxes are expected to hold steady at just under $2.5 billion.

Those estimates are based on the department’s economic outlook for both the state and the nation.

Johnson described the outlook for the national economy as “stable” as fears about an economic downturn are receding with the signing of a “Phase I” trade deal with China that is expected to boost U.S. exports, including agricultural products.

But she also warned of clouds on the horizon, such as the possibility of increased trade tensions as well as the spread of the novel coronavirus, which has disrupted manufacturing supply chains and threatens to disrupt the travel and tourism industry.

Johnson said the Illinois economy has been lagging that of the U.S. during the economic expansion, which has now lasted 111 months.

She said the tight labor market has driven down the state’s unemployment, last reported at 3.5 percent in December, a 50-year low. But she said that number is expected to climb to about 3.9 percent by the end of the current fiscal year in June, and could hover around 4.1 percent for the next fiscal year.

“This tight labor market is expected to translate into decelerating job growth and hit some of the limits that we can expect, so we won’t be adding the jobs as we have in the past, but it’s still solid performance that’s expected,” Johnson said.

PHOTO: Illinois Department of Revenue Director David Harris (right), agency economist Marty Johnson and Alexis Sturm, director of the Governor’s Office of Management and Budget, brief the House Revenue and Finance Committee on Wednesday at the Capitol in Springfield about their forecast for revenue growth in the upcoming fiscal year. (Capitol News Illinois photo by Peter Hancock)