SPRINGFIELD – The Illinois state health department says it is taking proactive steps against the spread of novel coronavirus as federal authorities warn that a spread of the virus in the U.S. is imminent.

“It’s not so much a question of if this will happen anymore, but more really a question of when it will happen and how many people in this country will have severe illness,” Dr. Nancy Messonnier of the Centers for Disease Control and Prevention said of the spread of the virus Tuesday, according to transcripts. 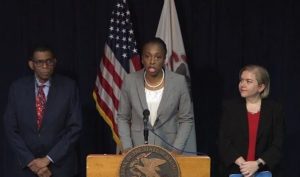 The 2019 coronavirus, called novel because it has not been observed in its current form prior to its spread in Wuhan, China, starting in December 2019, has been named COVID-19 by authorities.

Messonnier said the virus has seen “community spread” in Hong Kong, Italy, Iran, Singapore, South Korea, Taiwan and Thailand, meaning it has been spreading among people without identifiable points of contact with the existing virus.

She said the fact that the virus has caused illness resulting in death and has seen sustained person-to-person spread means it meets two criteria of being a pandemic.

“The world moves closer towards meeting the third criteria – worldwide spread of the new virus,” she said.

Dr. Messonnier said the U.S. recently enacted quarantine measures regarding the virus, meaning the isolation of people who have been in contact with the virus or an area linked to it but who are otherwise not symptomatic.

“We’ve also enacted the first quarantine of this scale in the U.S. and are supporting the state department and (Department of Health and Human Services) in repatriating citizens from high-risk areas,” she said. “We are doing this with the goal of slowing the introduction of this new virus into the U.S. and buying us more time to prepare. To date, our containment strategies have been largely successful.”

“I had a conversation with my family over breakfast this morning and I told my children that while I didn’t think that they were at risk right now, we as a family need to be preparing for significant disruption of our lives,” she said.

There’s no vaccine for the virus and no medications approved to treat it, making “non-pharmaceutical interventions” important to stemming or slowing the spread of the virus. These include staying home when sick, covering coughs and sneezes, frequent handwashing, and routinely cleaning frequently touched surfaces and objects.

Other more disruptive techniques include temporarily closing settings such as schools and workplaces where people gather, and “social distancing” or creating ways to increase distance between people, according to the CDC.

As of Tuesday, there had been 14 confirmed coronavirus cases in the U.S. and 40 cases in people who were recently repatriated to the U.S. after being held on a cruise ship on which the virus was spreading.

The Illinois Department of Public Health said in a news release that while the risk to the public is currently low, precaution is necessary.

“In the absence of medications or vaccines, community mitigation measures are the first line of defense against highly transmissible infectious diseases,” according to IDPH’s release. “Preventative actions should be practiced by Illinoisans at all times, but especially as we continue to monitor potential spread of a new virus.”

IDPH Director Dr. Ngozi Ezike said in the release the department is “working with health care providers and local public health officials, the (CDC), and other state agencies to coordinate a robust response and take every possible step we can to prepare.”

IDPH is conducting hospital assessments to determine available capacity and is assessing the availability of personal protective equipment such as gloves, gowns and masks for health care workers, according to the release.

Ezike said Illinois recently became the first state to test for the virus. According to the IDPH website, 70 tests have been conducted in the state, with 66 negative, two pending and two positive tests.

Those positives were in a Chicago-area woman who contracted the virus after visiting Wuhan, China, and her husband with whom she was in close quarters. Both have since been cured and released from isolation.

IDPH pointed to other preventative measures including setting up a statewide hotline for questions about coronavirus, providing guidance and recommendations to local health departments, hospitals, EMS, clinicians, and other partners; and communicating with the public by creating a coronavirus disease webpage, issuing news releases, hosting news conferences, conducting interviews and providing information on social media.

The IDPH hotline for residents outside of Chicago is 800-889-3931, and IDPH also has an email at DPH.SICK@illinois.gov. Chicago residents may call 312-746-4835 Monday through Friday during business hours and 311 during evenings, weekends, and holidays, or email coronavirus@chicago.gov.