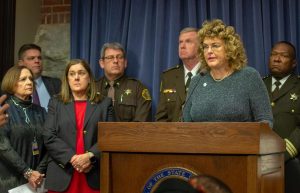 State Rep. Lindsay Parkhurst, R-Kankakee, joins Illinois sheriffs and fellow lawmakers at a Tuesday at a Capitol news conference to urge Gov. JB Pritzker to repeal a policy that prohibits communication and cooperation with federal, state and local authorities when an undocumented immigrant is released from prison on felony charges. (Capitol News Illinois photo by Jerry Nowicki)

SPRINGFIELD – Sheriffs and Republican state lawmakers are calling on Gov. JB Pritzker to scrap a new policy that they say prohibits communication between state, federal and local law enforcement agencies when an undocumented immigrant is released from a state prison after serving a felony sentence.

“I’m here to sound the alarm that a recent policy change by the Illinois Department of Corrections is making our communities and neighborhoods less safe,” Kankakee County Sheriff Mike Downey said Tuesday at a Capitol news conference with House and Senate Republicans.

Downey said his department contracts with U.S. Immigration and Customs Enforcement to coordinate the pickup, transfer and detainment of people released from state prison but still subject to federal detainers due to immigration status.

Prior to the change, IDOC would transfer them to the Pontiac Correctional Center, where the Kankakee County Sherriff’s Department would pick them up an hold them at the Jerome Combs Detention Center in Kankakee County until their immigration case is reviewed and adjudicated.

But because of the policy change, which sheriffs said they learned of indirectly on Jan. 30, all such transfers at the request of ICE are no longer allowed, Downey said.

Instead, those individuals are released locally from the facility where they were held without any notification of law enforcement entities.

“I am dumbfounded that we had to learn that dangerous felons were simply being released into our county and into our community without notice, coordination or even a courtesy call to local law enforcement,” Livingston County Sheriff Tony Childress said at the news conference.

Downey said he learned of, but was not given a reason for, the change when IDOC informed his office that all scheduled transfers were canceled. At that time, his department notified ICE, which was eventually forwarded correspondence from IDOC detailing the policy change.

“We’ve never been told anything as to what the rationale was, which is disappointing,” he said.

A spokesperson for IDOC did not directly answer questions from Capitol News Illinois, but issued a statement pointing to the Illinois Trust Act, a 2017 law signed by former Republican Gov. Bruce Rauner which restricts local law enforcement from handing undocumented immigrants over to federal agencies without a judicial warrant.

“Under the Illinois Trust Act, the Illinois Department of Corrections is prohibited from detaining an individual solely on the basis of an immigration detainer or non-judicial immigration warrant. All incarcerated individuals are released at the expiration of their sentence. We continue to work with the Governor’s Office to review our policies and procedures to ensure the safety of Illinois residents and compliance with state law,” IDOC said in the statement.

In 2019, Downey said, his officers transported 223 inmates to Kankakee after they were released from one of 21 state correctional facilities which were coordinating with federal authorities.

Downey said those transfers included 36 individuals who were found guilty of sexual offenses against minors; 11 of murder, attempted murder or intent to kill or injure; 19 of predatory criminal sexual assault; 33 of a criminal offense involving a weapon; 50 of drug offenses involving a substance other than cannabis; and 55 of felony-level traffic offenses including aggravated DUI and other such offenses.

“This is not a policy that is affecting people that should have amnesty,” Rep. Linday Parkhurst, R-Kankakee, said during the news conference. “This is a policy where we had 223 people in 2019 that were safely transported and deported to their country of origin because of their violent criminal nature.”

Downey said IDOC officials were also instructed not to comply with ICE requests.

The sheriffs and lawmakers said it is unknown how many individuals have been released without notification since the policy change was enacted.

“Nobody knows where they are, that’s the problem,” state Sen. Chapin Rose, R-Mahomet, said during the news conference.

“This is just plain wrong,” Downey said. “These convicted felons do not deserve to be given a head start or assistance from the state of Illinois in evading our federal law enforcement partners.”

State Sen. Jason Barickman, R-Bloomington, said lawmakers did not learn of the policy change until the issue was brought up by local sheriffs. He said the Senate GOP caucus sent a letter last Friday to IDOC Director Robert Jeffreys asking why the policy was changed, whose decision it was and how it was communicated, but has not received an answer.

Barickman called for legislative hearings on the issue from a joint House and Senate committee.

Republicans said they communicated the request to Democratic leaders in the General Assembly, but a spokesperson for Senate President Don Harmon, D-Oak Park, said it would be reviewed when it arrived Tuesday, and a spokesperson for House Speaker Michael Madigan, D-Chicago, said he had not reviewed the claims so he declined comment.

A request for comment from Gov. JB Pritzker’s office was not immediately returned Tuesday evening.