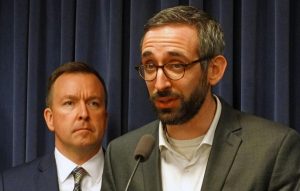 New board would set upper payment limits on high-cost medicines

SPRINGFIELD – A group of Democratic lawmakers renewed their push Tuesday for a bill that would pave the way for price caps on many high-cost prescription drugs, a proposal that is likely to meet strong resistance from the pharmaceutical industry.

Rep. Will Guzzardi, of Chicago, and Sen. Andy Manar, of Bunker Hill, said the rising cost of prescription drugs has gotten out of control, putting the health of many Illinoisans at risk.

“This is a staggering problem and it’s happening across the country,” Guzzardi said during a news conference at the Capitol. “Drug manufacturers are making record profits quarter after quarter, year after year, while our families are struggling to afford the medications that they need.”

Guzzardi is the chief sponsor of House Bill 3493, a measure he introduced last year. It would establish a five-member Prescription Drug Affordability Board that would have authority to conduct cost reviews and set “upper payment limits” for any brand name drug with a wholesale price of $30,000 or more for a one-year supply or a course of treatment, or for any drug for which the wholesale price jumps by $3,000 or more in a single year.

Upper payment limits are commonly used in private insurance and state Medicaid programs, but they are typically negotiated individually between the health plan and drug manufacturers. Guzzardi said his bill would establish uniform upper payment limits that would apply to all payers statewide.

That same authority would extend to “biosimilar drugs” – a biologic product that is highly similar to another drug already approved for sale – with a price that is less than 15 percent below the name brand price.

It would also have authority to regulate generic drug prices if those drugs cost $100 or more for a 30-day supply or if their prices jump 200 percent or more in a single year.

Manar, who is sponsoring the bill in the Senate, called it “a reasonable step in the right direction that will say to all of the purveyors of profit in today’s health care system when it comes to the affordability of prescription medication, you’re going to have to cut it out.”

Also speaking at the news conference was Graciela Guzman, a woman who suffers from endometriosis and is a campaign director at the Healthy Illinois Campaign public policy group. She said the cost of one of her medications recently jumped from $68 to $500. Because of that, she said, she chose to split her pills in half in order to stretch out her supply, but that also meant she wasn’t well enough to go about her normal daily routine.

“Medications can’t work for me if I can’t afford them, period,” she said. “I know I’m not alone in that. So many Illinoisans across this state need the peace of mind to know their prescriptions are going to be there for them and that they will be able to afford them.”

Guzzardi introduced the bill last year but it stalled in a House committee after it failed to win a majority of votes to advance to the House floor.

This year, Guzzardi said he is proposing some minor changes based on the feedback he heard from the committee and other interest groups.

Tiffany Haverly, director of public affairs at PhRMA, issued an email statement saying the group is sympathetic toward those who struggle to afford their medications.

“With that said, proposals like HB 3493 that arbitrarily set prices are the wrong approach and could limit Illinoisans’ access to treatments and cures,” she said. “Further, HB 3493 fails to address the long line of middlemen in the pharmaceutical supply chain that impact what patients pay at the pharmacy counter.”

“One of the best ways to lower out-of-pocket costs is to make sure patients get their share of the rebates and discounts that biopharmaceutical companies already provide; rebates and discounts that exceeded $166 billion in 2018 alone,” the statement continued. “At the end of the day, the government price setting proposed in this legislation could threaten further research into lifesaving medicines and put patient access at risk.”

The bill is still pending in the House Prescription Drug Affordability and Accessibility Committee, which Guzzardi chairs. It was scheduled for a hearing this week but the committee was canceled and is expected to be rescheduled.