SPRINGFIELD — Education funding is once again top of mind at the Capitol, with a key cog of Gov. JB Pritzker’s fiscal year 2021 budget proposal addressing the matter already facing pushback.

At issue is the state’s three-year-old K-12 education funding system, known as the evidence-based model. For the fourth straight budget year, lawmakers are discussing how many hundreds of millions of dollars in additional funding that formula will receive as compared to a year ago. 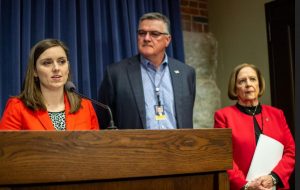 Gov. JB Pritzker laid out two scenarios for K-12 funding in his Wednesday budget address, which only details his priorities ahead of months of negotiations in the General Assembly.

Under the tentative proposal, which of the scenario plays out would depend on whether voters approve a constitutional amendment in the November general election to scrap Illinois’ 4.95 percent flat income tax and allow the state to charge higher rates on higher levels of income.

If the amendment passes — essentially raising the tax burden on earners making more than $250,000 a year while maintaining or lowering it modestly for all others — government forecasters predict the state would have an extra $1.4 billion to spend in the fiscal year, allowing for the added $150 million in K-12 funding.

The graduated tax-free budget holds $40 million in reserve for categorical payments to school districts for programs such as special education and transportation on the contingency of the graduated tax passage as well.

Republicans lampooned the dual budget proposal as one that holds added investment in education “hostage” as a marketing ploy for Pritzker’s graduated tax.

“This bullying tactic to hold funding to our schools hostage, and our students, in order to get his way, not only is irresponsible but represents a false choice,” Rep. Avery Bourne, R-Raymond, an assistant minority leader in the House, said in a news conference Thursday.

Democrats — including two of the lead architects of the evidence-based model — were lukewarm on the idea as well, but they acknowledged it’s the first step in a long process of budgetary negotiations.

State Sen. Andy Manar, D-Bunker Hill, led the Senate Democrats in negotiations for the evidence-based formula’s passage in 2017. On Thursday, he said in an interview he would support full funding for the $350 million regardless of the graduated tax’s passage.

“It’s day one of the budget making process and there’s multiple ways to achieve what I think most people want to achieve, which is at the end of fiscal year 21 (which runs July 1, 2020 to June 30, 2021), we will have… put minimum $350 million more into the evidence-based formula,” he said.

The $350 million number is defined as a target in statute, with the goal of bringing all districts to 90 percent of funding adequacy by 2027. Another goal is to drive down local property taxes by reducing the need for school boards to raise their property tax levies each year to meet spending needs.

The formula determines the level of funding need for each district individually through an adequacy target determined by several variables tied to student performance.  It separates districts into four tiers — one being the least funded, four being the most — and distributes 99 percent of new funding to the lowest two tiers with the majority going to Tier 1.

Republicans questioned whether a budget appropriating $350 million but holding $150 million of that in reserve would affect which formula kicks in, and Manar said that “critical question” would have to be addressed in budget negotiations.

Manar and Rep. Will Davis, a Homewood Democrat and House sponsor of the evidence-based formula when it passed, argued this week that for all districts to meet adequacy in the law’s original 10-year target window, the state should be contributing hundreds of millions more on top of the $350 million.

“I believe that if (education is) truly priority… not only can we allocate the $350 million that the governor is referring to, but believe it or not, I think we can do better. If we prioritize it, we can put as much as a half a billion new dollars in K through 12,” Davis said in a news conference following the budget address.

According to an analysis by the non-profit think tank Center for Tax and Budget Accountability, the actual number needed to get the state to adequacy in 2027 is $7.35 billion, or about $780 million in total added funding each year.

Manar said he’d ideally like to see that number hit, but acknowledged that the $350 million number was a product of negotiations which led to the 2017 passage of the bill, not an actual avenue to adequacy within the specified time frame.

He also said funding less than the $350 million could drive Tier 2 districts down to Tier 1.

For Bourne and House Republicans, though, the prospect of $150 million that may or may not be realized this year means instability for local schools and the potential of upward property tax pressures.

“What the governor proposed, this two-step approach, does not guarantee fully funded schools and it will force their budgeting process to make difficult decisions without the certainty of knowing what the state will be sending them,” she said.

But Manar said three straight years of funding increases totaling more than $900 million have schools in a much better place than they were five years ago, when state budgeting conversations centered around what extent K-12 budgets would be prorated each year.

He also said the process of district and state budgeting always intertwines to create some uncertainty, and this year is no different.

While Manar said he believes in the governor’s commitment to education, Republicans were not the only ones putting Pritzker’s budget proposal on blast.

Robin Steans, president of Advance Illinois, an independent public education policy organization, said in a statement she was “deeply disappointed” in the governor’s dual budget approach.

“In a world where the current Minimum Funding Level won’t get us to full funding in the promised ten-year timeframe, and where we want schools to put new dollars to work for children as quickly and effectively as possible, the FY21 investment strategy is devastating,” she said in a news release.

Both chambers of the General Assembly will have to approve a budget before Pritzker can sign it into law, and the process is generally scheduled to conclude at the end of May.

PHOTO: Rep. Avery Bourne, R-Raymond, speaks during a news conference Thursday at the Capitol in Springfield called by Illinois House Republicans in opposition to a budget proposal by Gov. JB Pritzker that would withhold $150 million of a proposed $350 million funding increase for K-12 education unless voters approve a graduated tax proposal in November. Republicans said Pritzker was holding the funding “hostage” in an attempt to pass the graduated tax. Also pictured are Rep. Randy Frese, R-Paloma, and Rep. Norine Hammond, R-Macomb. (Capitol News Illinois photo by Jerry Nowicki)