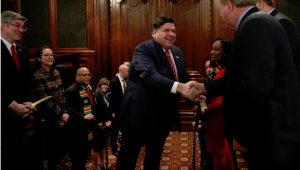 If voters approve that graduated income tax initiative in the November general election, Pritzker is asking for a roughly $1.6 billion increase in state general revenue fund spending for the upcoming fiscal year, which begins July 1.

That would bring total state spending in that fund to just over $42 billion, helping to pay for a $350 million increase in K-12 education, a 5-percent increase in higher education operating funds and an increase in contributions to the state’s backlog of unpaid bills and unfunded pension obligations.

If the constitutional amendment fails, overall state spending would increase by about $200 million from a year ago in the general fund under the governor’s proposal, equaling roughly $40.6 billion. In that scenario, $1.4 billion in spending authority would be held in reserve in a combination of budget cuts and withholding of new spending on state programs.

“Because this reserve is so large, it inevitably cuts into some of the things that we all hold most dear: increased funding for K-12 education, universities and community colleges, public safety and other key investments – but as important as these investments are, we cannot responsibly spend for these priorities until we know with certainty what the state’s revenue picture will be,” Pritzker said in his budget address in the Illinois House chamber Wednesday.

But Republican leaders in the General Assembly argued that the choice between the two budgets is a false one, and Pritzker’s address was nothing more than a sales tactic for the graduated tax.

“The reserves he’s calling for are a marketing plan to sell his (graduated tax) increase,” Senate Minority Leader Bill Brady, R-Bloomington, said. “If those resources weren’t there, I don’t think this is the way he would have approached the spending plan and it’s not a way we would approach it.”

Both House and Senate Republicans called for “greater efficiencies” and reduced state spending in certain state agencies. They also said $656 million in increased base revenue projections for the fiscal year mean the level of state investment in programs from a year ago can be maintained without new tax revenues.

House GOP Leader Jim Durkin, of Western Springs, also pointed to a surplus of roughly $180 million from the current year’s operating budget as a sign of the effectiveness of bipartisan budgeting.

“We have the money to be able to fulfill our obligations in every need for the state of Illinois,” Durkin said in a news conference. “So, to say that you go on two different tracks and say, ‘Well, you know, if you don’t pass a constitutional amendment, we’re going to have a world of hurt that’s going to be delivered upon state employees, and also state retirees as well, and health care providers.’ I just felt that that’s a wrong approach.”

If the graduated tax passes, the new rates would effectively increase the tax burden on individuals and couples making more than $250,000 while keeping it level or lowering it modestly for all others. The tax increase would go into effect on Jan. 1, 2021, meaning half of the budget year, which runs from July 1 to June 30.

Republicans who oppose the graduated tax say no new revenues are needed and the rates could be changed to raise taxes on more Illinoisans in future budget years.

While the governor’s office expects annual revenues from the tax to be $3.6 billion once it is in effect for a full year, budget officials said Wednesday they can expect only $1.4 billion in revenue from payroll withholdings for fiscal year 2021.

The proposed budget – with or without graduated tax revenues – includes the full $8.6 billion general revenue fund contribution to the state’s pension fund that is mandated by law. That would be about 20 percent of all general fund spending, and another $100 million would be dedicated for that purpose if the graduated tax passes.

Also with or without the graduated tax, funding for the Department of Children and Family Services would increase by 20 percent, or about $147 million, in the governor’s proposal.

“We will increase (DCFS) personnel numbers by nearly 150 new staff — that’s on top of the 300 workers we added over the last year. This would represent an 11 percent staffing increase over the past two years,” Pritzker said.

Also independent of the graduated tax’s success is a proposed $50 million increase to Monetary Award Program grants that help students with financial need afford college, as well as other added investments in early childhood education and other social service programs.

For K-12 education, a state law passed in 2017 sets a target of $350 million of added funding for an evidence-based distribution formula each year. With graduated tax revenues, that number would be met. Without, the proposed budget would only include an added $200 million in K-12 spending.

Local governments would see funding from sales and income taxes decrease by 5 percent, bringing total proration of that funding program to 10 percent.

A budget without the graduated tax would also withhold $400 million in contributions to state employee group health insurance, put off payments of $300 million in corporate income tax refunds for the fiscal year and cut $30 million in funding for Open Space Land Acquisition and Development grants.

Another $100 million in transit cost expenditures would be shifted from the general revenue fund to the road fund.

Pritzker also noted that the budget included $45 million in revenue from the legalization of adult-use marijuana. That’s about 45 percent of the tax revenue from the program, with the remainder going to reinvestment programs in communities adversely impacted by the war on drugs as well as mental health and drug conviction expungement programs.

Republican legislative leaders said they would push to separate the budget from any proposed graduated tax revenues, however.

When asked if Republicans in his caucus would support a budget with significant funding in reserves on the contingency of the graduated tax passage, Brady said “hypothetically, I don’t see that.”

“I think my caucus just wants to see a balanced budget,” Brady said. “We have to live within our means. We believe we can do that and still meet educational needs, child safety needs, pension responsibilities and some other needs that are out there.”

“I’m prepared to keep an open mind and reach a conclusion at the end of May,” Durkin said, “but there are certain parameters that Republicans are going to have to demand. And that is, we don’t feel that we have to have a budget that is going to be conditioned upon this pixie dust that is spreading through the capital and this constitutional amendment. It’s just not right.”

Democratic leaders from the General Assembly said they are ready to work with the governor as well.

“The governor’s budget proposal is an important starting point in a process that will require many tough decisions,” House Democratic Majority Leader Gregory Harris, of Chicago, said in a statement. “We look forward to working with the governor and our colleagues on both sides of the aisle to pass an on-time balanced budget that lives within our means, funds critical services, helps stabilize state finances, and continues to build a stronger Illinois.”

Senate President Don Harmon, D-Oak Park, called Pritzker’s budget a “solid proposal” that “starts an important conversation about where our state is going and what kind of state it will be.”

“I applaud his emphasis on the need to tackle college affordability and his recognition that early childhood education is the best investment we can make in our future,” he said. “The bottom line is this proposal is a great starting place for the work we’ll do in the coming weeks, work that I hope will again bring Republicans, Democrats and the governor together in balancing the budget, funding priorities and moving Illinois forward.”

PHOTO: Gov. JB Pritzker enters the House Chambers Wednesday at the Illinois State Capitol prior to delivering his annual budget address. He tied the proposal to the passage of a graduated income tax amendment and presented two budget scenarios if the amendment does or does not pass. Press pool photo/Antonio Perez/Chicago Tribune