HSHS St. Elizabeth’s Hospital in O’Fallon is the only hospital in the Metro East area approved to conduct transcatheter aortic valve replacement. 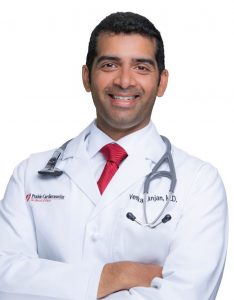 The three major symptoms are chest pains, a shortness of breath or passing out. Dr. Anjan explained that there are two basic valve problems; either the valve does not open properly, which causes the heart to try to force the blood out; or the valve does not close properly, so blood leaks through. In either case, it creates turbulent blood flow, which can be heard with a stethoscope. He said that most patients are referred to the clinic by primary care doctors who hear a heart murmur, which may be a signal that the valves are not working properly. “Aortic stenosis becomes more common as we age,” says Anjan.

The standard treatment for valvular heart disease was traditionally open-heart surgery. This complicated surgery takes about four to five hours to conduct; requires a five-day stay in the hospital; and takes two months or more for the patient to fully recover.

Patients who undergo a minimally invasive TAVR procedure experience less down time, faster recovery and, often, a shorter hospital stay (three to five days on average) than patients undergoing open heart surgery. Most patients begin the process of gaining their strength back and start cardiac rehabilitation within a period of days or weeks, which results in dramatic improvements in their quality of life. In contrast, open-heart surgical procedures often require a total recovery time of up to three months.

Initially, only those patients considered to be intermediate, high risk or inoperable for open-heart surgery were eligible for TAVR. In August 2019, however, the Food and Drug Administration expanded its indication to include low-risk patients as well.

Anjan explained that the long-term effectiveness of TAVR has yet to be determined. “Open heart surgery has been around a lot longer and has gotten very good results. We know that those will last 10 to 15 years, but TAVR has only been used for five to eight years,” he said. “Lower end (less risky) patients are being studied in trial now. So, TAVR could become the standard treatment.”

“Having this level of procedure available locally is a huge benefit to the region and is just one of many advanced services the long collaboration between St. Elizabeth’s and Prairie has established,” says St. Elizabeth’s director of Cardiovascular Services Bonnie Schnieder, MS, RT.