SPRINGFIELD — The Illinois State Police director said this week that his department has stepped up illegal firearm ownership enforcement methods, but it needs greater resources to continue the job — including fingerprints of Firearm Owner Identification Card applicants.

During a news conference Thursday, ISP Director Brendan Kelly gave an update about enforcement efforts and announced support for Senate Bill 1966, a measure that would increase FOID card fees and mandate fingerprinting of applicants.

The House passed the bill in May, but a Senate measure to agree with that final language stalled before a vote. It remains in the Senate assignments committee but could be taken up this legislative session. 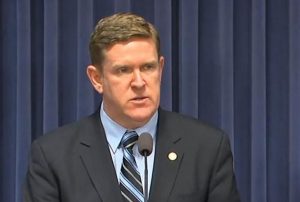 Under the bill, sponsored in the House by Rep. Kathleen Willis, D-Addison, new applications for FOID cards and renewals — which would be required every five years — would cost $20, up from the current cost of $10. The fees would fund law enforcement revocation efforts for those not legally allowed to own FOID cards or guns.

Gun advocacy groups such as the Federal Firearms Licensees of Illinois and the Illinois State Rifle Association oppose the bill, and have argued fingerprinting and increased fees hinder Second Amendment rights.

In a news release Friday, Assistant House Republican Leader C.D. Davidsmeyer, of Jacksonville, called the plan “an overreach” by lawmakers and the ISP.

“Director Kelly is pushing legislation that will require all legal gun owners in Illinois to give their fingerprints to the State Police when requesting or renewing their FOID card,” Davidsmeyer said in the release. “This is a continued attack on law-abiding gun owners and it puts undue financial burden on many citizens just trying to protect their families.”

While Kelly was questioned about the constitutionality of fingerprinting gun owners at the news conference, he said ISP’s main consideration is public safety — lawmakers and judges will decide constitutionality.

“We will be able to do a much more thorough, effective and quicker background check, even for law-abiding citizens, if we have that fingerprint,” he said.

Kelly’s briefing came one year after a shooting at an Aurora warehouse left five people dead and others injured. That shooter, Kelly said, should not have had a gun because there was a 1995 felony aggravated battery conviction on his record.

The ISP director also said there are several instances similar to this one in which criminal background information is not included in key national databases. There are “over 7 million firearms ownership-prohibiting records in this country which are not readily available in background check databases,” he said.

The information does show up when a person is fingerprinted — and it did when the Aurora shooter was fingerprinted for a concealed carry permit in 2014 — but he had already purchased the gun used in the shooting by that time because he lied on his FOID card application, Kelly said.

At the time, police only sent a letter to the shooter demanding he turn in his guns, but took no other action.

“Because a form letter sent only at the time of revocation is not enough, we committed to sharing FOID revocation data with any law enforcement agency at any time. That is done,” Kelly said.

Now there is a web portal accessible to any criminal justice department in the state, he said. It includes the reason for revocation, new convictions and other prohibitors, as well as firearms transaction histories.

Kelly said before the Aurora shooting, ISP was “only incidentally” confiscating guns from those who were not legally allowed to own them as part of “other types of investigations.” There was no concerted, coordinated effort.

“Enforcement has improved,” he said, noting the ISP’s criminal investigation division conducted more than 200 revocations since May 2019 that resulted in retrieved guns.

Kelly said the fund supporting police background checks has “been affected by budget crisis after budget crisis,” but recent stability from the current administration has been beneficial, “allowing the ISP to build out multi-year hiring and service plans.”

While 90 percent of about 300,000 new FOID applications in the past year were processed within the mandated 30 days, Kelly said, it took police a total of 13,877 hours of overtime. Gun rights advocates have sued over alleged FOID and concealed carry permit delays, however.

“Even with the incredibly hard work of the men and women in justice services, and with the incredibly hard and sometimes dangerous work of the men and women serving in the division of criminal investigations, there is still much more to be done,” Kelly said in backing SB 1966. “Without additional resources for both state and local law enforcement to ensure illegal firearms are not possessed by potentially dangerous individuals, the odds still remain too high that more tragedies will occur.”

PHOTO: Illinois State Police Director Brendan Kelly speaks in favor of a bill that would require fingerprinting of Firearm Owner Identification Card applicants and double the cost of a new card and renewals. He also gave an update on ISP’s enforcement of illegal firearm ownership revocations during a news conference Thursday in Springfield. (Credit: blueroomstream.com)