The newly named Business of the Year in Edwardsville has multi-million-dollar plans for expanding its local presence, its chief executive officer said Tuesday.

In accepting the award during the sixth Annual Business Forecast Breakfast, Anderson Hospital President and CEO Keith Page detailed the plans for completing its new health-care campus at Goshen Road and District Drive. The plans include multiple buildings and services, he said. 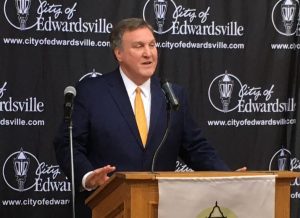 The first phase of the development project is the current construction of a surgery center and a specialty clinic in partnership with Cardinal Glennon Children’s Hospital in St. Louis. The site is part of the ongoing residential/recreational development in the southeastern part of Edwardsville, near Liberty Middle School and the YMCA Meyer Center. In recent years, the hospital has purchased a total of 15 acres for current and future projects.

The surgery center is 14,000 square feet and will focus on outpatient surgeries by Cardinal Glennon specialists.

The ribbon on the surgery center should be cut in June.

At about the same time, Page said, ground will be broken for “Anderson Rehabilitation Hospital,” the first hospital facility dedicated to rehab in Metro East.

It will be a $24 million joint venture with Kindred Hospital – St. Louis.

The rehab facility will open in the summer of 2021.

Still ahead are plans for a “significant medical office building” on the Edwardsville campus, he said.

Improvements are also being planned for the main campus in Maryville, he said, although not elaborating.

In accepting the award, Page said the city of Edwardsville has been “fantastic at every step of the project.”

“We have a pretty substantial campus in Maryville, but health care is moving faster than ever. We want to push our footprint further into the Edwardsville community.”

Some 300 people attended the breakfast, thought to be the largest crowd yet.

The theme of the event was the need for business to adjust to changes at all levels, transforming the status quo to assure success.

“We don’t like traveling long distances for our health-care providers, and you don’t always like to go to St. Louis when you have a need. Anderson Hospital has been serving our area for decades. And it’s important that they grow and adjust to needs. “