SPRINGFIELD – Government reform advocates told a panel of state lawmakers Thursday that Illinois has some of the weakest governmental ethics rules in the country and that lawmakers should put more teeth into them if they hope to regain the trust of the public.

“For me, the disheartening part of all of it is not that so many lawmakers at all levels of government have strayed so far from the rules and have overshadowed the good work of ethical lawmakers, but that so many across our state kind of react to this news with a shrug,” said Georgia Logothetis, assistant director of the watchdog group Common Cause Illinois. “It’s a kind of disheartened acceptance that, well, this is just the way things work in Illinois.”

Logothetis was part of a panel of reform advocates who testified before the Joint Commission on Ethics and Lobbying Reform. The commission was formed last year in the wake of federal investigations that led to indictments against three sitting state lawmakers, two of whom have since resigned.

Thursday’s hearing, the third since the panel was formed, focused on the state’s Governmental Ethics Act, and specifically its provisions dealing with conflicts of interest and financial disclosure requirements.

While some states specifically prohibit lawmakers and other public officials from acting on issues in which they have a direct financial interest, Illinois has no such provision.

In fact, the only thing the Illinois law says about conflicts of interest is that when they arise, lawmakers “should consider the possibility of eliminating the interest causing the conflict.”

“If that is not feasible,” the statute continues, “he should consider the possibility of abstaining from such official action.”

Marie Dillon, policy director for the Better Government Association, a Chicago-based advocacy group, said that law was the result of a 1965 study commission that initially recommended mandatory rules, along with penalties and public reporting for violators. Those suggestions were rejected by lawmakers at the time.

“So, we ended up with a law that leaves it up to individual legislators to decide if they have a conflict of interest and, if so, what to do about it,” Dillon said. “As a taxpayer, I have to say emphatically, that’s not good enough.”

Nicholas Birdsong, a policy specialist for the National Conference of State Legislatures, said conflict of interest laws vary widely among the states. He said 35 states require lawmakers to recuse themselves from votes in which they have a conflict of interest and 13 states, including Illinois, leave the decision up to the lawmaker.

In Tennessee, where the rules are different in each chamber, the state House has a mandatory recusal policy and the state Senate has a discretionary policy. Utah, Birdsong said, requires legislators to vote if they are present, regardless of whether they have a conflict.

Birdsong said some states have adopted the idea that lawmakers should be able to vote, even if they have a conflict of interest, because “legislators are elected and they’re obligated to vote according to the will of their constituents regardless of whether or not it serves or hurts their interest, and so having these sort of mandatory recusal rules essentially limits their ability to do their jobs.”

Many of those testifying Thursday also called for updating and expanding the Statement of Economic Interests forms that public officials in Illinois are required to fill out.

“The interesting thing about this document to me is, I’m not sure it adequately assesses what the interests are,” said Brad Cole, executive director of the Illinois Municipal League.

As an example, Cole pointed to one question on the form that asks what other units of government the person filing the form has worked for in the preceding year.

Other questions on the form ask filers to identify the names of businesses in which they have an ownership interest; the names of professional organizations in which they are an officer or director; the nature of any professional services they rendered for which they were paid more than $5,000; the identity of significant capital assets they own; and the name of any lobbyist with whom they have a “close economic association.” 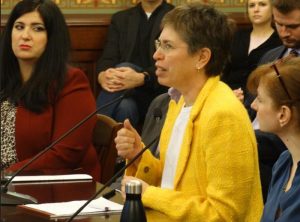 Others pointed out that people filling out the form do not have to disclose outstanding debts or credits, any real estate holdings they may have other than their home, or how much income they derive from sources that might present a conflict of interest.

Former Illinois Lt. Gov. Sheila Simon, who served from 2011 to 2015 under then-Gov. Pat Quinn, said reporters often refer to the current document as a “none sheet” because people can write the word “none” on virtually all of the questions, even though they might still have significant outside interests.

She argued that the form should be designed in a way that is useful to the public rather than in a way that protects the privacy of public officials.

The joint commission so far has not made any recommendations for new ethics laws. Its final report to the General Assembly is due March 31.

But Democratic Gov. JB Pritzker made a forceful plea in his State of the State Address on Wednesday that he expects lawmakers to pass “real, lasting ethics reform this legislative session.”

“I think that message coming from the leader of our state is one of the strongest messages that can take place,” Lt. Gov. Juliana Stratton, a member of the commission, said after the meeting.

PHOTO: Former Lt. Gov. Sheila Simon says the state should require more financial disclosure from lawmakers during testimony Thursday before the Joint Commission on Ethics and Lobbying Reform at the Capitol in Springfield. (Capitol News Illinois photo by Peter Hancock)