SPRINGFIELD – Gov. J.B. Pritzker struck a tone of optimism and accomplishment in his annual State of the State Address on Wednesday, declaring “the old patronage system needs to die” as he outlined his policy goals for 2020. 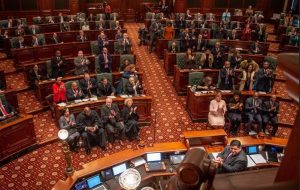 “Those who would shout doom and gloom might be loud – using social media bots and paid hacks to advance their false notions – but they are not many,” Pritzker said in his speech to members of the House and Senate on the floor of the House. “You see, we’re wresting the public conversation in Illinois back from people concerned with one thing and one thing only — predicting total disaster, spending hundreds of millions of dollars promoting it, and then doing everything in their power to make it happen.”

The governor laid out broad policy goals in the speech, emphasizing a need for ethics reform in the wake of an ongoing federal investigation which resulted in a guilty plea on bribery and tax fraud charges from former Democratic state Sen. Martin Sandoval on Tuesday.

“And now we have to work together to confront a scourge that has been plaguing our political system for far too long. We must root out the purveyors of greed and corruption — in both parties — whose presence infects the bloodstream of government,” he said.

Pritzker spoke of revolving-door prohibitions and lobbying bans for sitting lawmakers. He also emphasized pension reform and reforming the criminal justice system by phasing out cash bail among other legislative action.

He urged clean energy reforms, but said, “the old ways of negotiating energy legislation are over. It’s time to put consumers and climate first. I’m not going to sign an energy bill written by the utility companies.”

Pritzker said it’s time to empower local governments to consolidate some of the 7,000 government units in the state,  and he emphasized “job creation, education and job training programs, child care and pre-school, and a focus on building essential tools of success such as high-speed Internet in all corners of our state.”

But for Republicans watching the speech there was a major omission: a commitment to a proposal they call “fair maps,” which would take the power of drawing legislative districts out of the hands of lawmakers and give it to an independent commission.

“I’ve never seen this state so divided against Chicago as what I see it now and I, as I talk to people, the biggest reason for that is the Democrats have given themselves so much power and such a supermajority by gerrymandering maps,” Senate Minority Leader Bill Brady, a Republican from Bloomington, said. “The rest of the people in the state feel neglected.”

He said partisan-drawn legislative maps “leads to the corruption that we have” by allowing corrupt elected officials to remain in power by tipping the electoral scales in their favor.

While Brady called Pritzker’s address a “good speech” – one that was often threaded with bipartisan applause – he and fellow Republicans said they wanted to see a greater focus on growing jobs.

“I think the speech was well written, and the bipartisan applause was much about the storytelling,” he said.

Pritzker devoted much of his speech to celebrating accomplishments from 2019 – passage of a balanced budget; a $45 billion capital improvements bill; legalization of recreational marijuana; and criminal justice reforms that mean people will no longer have their driver’s licenses suspended or revoked for unpaid parking tickets or fines.

But he said more needs to be done in the coming year, especially in promoting racial diversity and social equity.

“Bit by bit, inch by inch, I am working hard to reverse the harm that has been done to people and communities that have been left behind over many generations by government policies and elected officials who were content to simply ignore them,” Pritzker said.

Those remarks received high praise from members of the Illinois Legislative Black Caucus. But they also said they intend to make sure Pritzker follows through on the commitment, especially in the distribution of jobs created through the capital plan.

“There are no other communities in the state of Illinois that have been ignored like the black communities,” Rep. La Shawn K. Ford, a Chicago Democrat, said during a black caucus news conference after Pritzker’s speech. “So we are grateful that we voted for almost a $50 billion capital bill to rebuild Illinois. … That means that this caucus will stand strong to work with the governor’s administration and urge our constituents to urge the governor to rebuild our black communities.”

While the policy agenda that Pritzker laid out focused mainly on positive-sounding initiatives, the issue of ethics reform was foremost on the minds of most lawmakers, Republicans and Democrats.

Their concerns were heightened this week after Sandoval’s guilty plea. And they are sure to be a focus of attention next Tuesday, Feb. 4, when former Rep. Luis Arroyo, a Chicago Democrat, is scheduled to be arraigned on federal bribery charges.

“On Jan. 9, I was sworn in as a state representative and that afternoon I was called a corrupt politician,” freshman Rep. Maurice West, a Rockford Democrat, said during the black caucus news conference. “And though I could get mad about that, I couldn’t because of the history of how things have been operating in our state.”

Veteran state Sen. Dale Righter, a Mattoon Republican who has announced he won’t seek re-election this year, said he was disappointed in how little Pritzker spoke about the need for ethics reform.

“The governor who is the leader of a party that is drowning in corruption devoted four paragraphs of an 80-paragraph speech to corruption,” Righter said in an interview. “He spent twice as much time talking about the flags outside the Thompson Center than he did about corruption within his own party. He missed a huge opportunity here.”

House Republican Leader Jim Durkin, of Western Springs, said in a separate news conference that there is broad bipartisan support for ethics reform. But he argued that the roadblock to passing such reforms is House Speaker Michael Madigan.

“I would just say it’s up to him,” Durkin said in a news conference. “He’s the one who has the agenda. He’s the one who calls the bills on whether or not they’re going to be placed in a committee or for a vote. So he needs to know that we’re willing to move forward.”

Madigan, the Chicago Democrat who has been speaker for all but two years since 1983, said, “for the first time in a long time, we come into a legislative session with the opportunity to build on success.”

“While we have seen major steps forward, we have also seen the good work of the many honest members of this Legislature be overshadowed too often by the wrongdoing of individuals who have sought to put themselves first,” Madigan said. “It’s clear that we must take significant steps within the coming weeks to restore confidence in state government. But let’s be clear: bad actors will always try to game the system and break the law. We must commit to sending the clearest sign the game is over and every step will be taken to prosecute.”

PHOTO: Gov. JB Pritzker prepares to deliver his State of the State address Wednesday at the Capitol in Springfield. (Capitol News Illinois photo by Jerry Nowicki)