The First National Bank of Waterloo and Robert Hoffmann, chairman of the Board, announced that Rick Parks will succeed Gary Hemmer as the bank’s president.

“We are delighted to have Rick Parks join the First National Bank of Waterloo as the new president,” said Hoffmann. Parks will become the bank’s ninth president spanning the bank’s history of 108 years.” 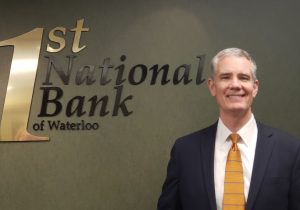 “I am looking forward to joining the First National Bank Team and to continue to build on its rich tradition and history,” said Parks.

Parks has his MBA from St. Louis University and his Bachelor of Science majoring in finance from Olivet Nazarene University in Kankakee, Ill. Parks and his family live in O’Fallon, Ill.

First National Bank of Waterloo has over $485 million in total assets and 11 banking centers in Central and Southern Illinois.  Its banking centers are located in Waterloo, Columbia, Millstadt, O’Fallon, Dupo, Smithton, Effingham and Stewardson.  The bank will also be acquiring Best Hometown Bank, which has banking centers in Collinsville and Maryville and has assets of $115 million.  The acquisition is set to close on Jan. 31, 2020.