State election officials confirm as many as 16 who identified as not being U.S. citizens voted in 2018-19

SPRINGFIELD — Republican lawmakers in Illinois are demanding answers from Secretary of State Jesse White about how 545 self-identified non-U.S. citizens were mistakenly registered to vote through the state’s new automatic registration system, including 16 who actually cast ballots in 2018 and 2019.

In a letter to Democratic House Speaker Michael Madigan, five Republicans who serve on the House Executive Committee called the erroneous registrations, “a serious breach of supposed protections put in place to ensure the integrity of our voter rolls in the State of Illinois.”

“This is an absurd lack of compliance with state law, surfacing less than three weeks from the opening of early voting for our state’s 2020 general primary election,” the Republicans wrote. “Given this, we are requesting an immediate hearing of the House Executive Committee to investigate this situation and to hear testimony directly from Secretary of State Jesse White, officials of the State Board of Elections, representatives from our local election authorities, and others concerned with this situation.” 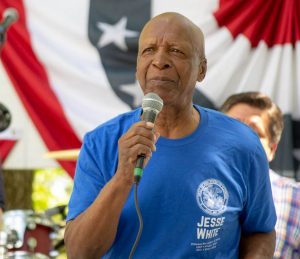 The letter was signed by Reps. Tim Butler, of Springfield; Keith Wheeler, of Oswego; Joe Sosnowski, of Rockford; Grant Wehrli, of Naperville; and Ryan Spain, of Peoria.

In addition, all 19 Republican senators signed a letter directly addressed to White asking, among other things, what assurances he can provide that such an error won’t happen again.

Madigan’s office did not respond to a request for comment. But Democratic Sen. Andy Manar, of Bunker Hill, issued a statement Tuesday saying he might call for Senate hearings.

“There is absolutely no room for administrative ineptitude when it comes to properly conducting our election system,” Manar said. “Democrats and Republicans came together and unanimously approved automatic voter registration, and we expect it to be done correctly…If it takes a Senate committee hearing to get those answers, that’s the course I’ll pursue.”

In 2017, Illinois lawmakers unanimously passed Senate Bill 1933, which provides for automatic voter registration whenever someone applies for or renews a driver’s license. Under that system, the secretary of state’s office shares a database with the State Board of Elections so driver’s license officials can immediately tell if an applicant is already registered.

If they are not, they are asked whether they want to be registered. If they say yes and they have checked a box indicating they are a U.S. citizen, their information is automatically forwarded to the State Board of Elections.

But in a Dec. 18, 2019, letter to the board, White’s office said information from 574 people who self-identified as being non-citizens was mistakenly included in a batch of data transferred to the board. That information was then forwarded to local election officials to finalize their registrations.

State Board of Elections spokesman Matt Dietrich said in an email that of the 574 people who checked “no” on the driver’s license application citizenship question, 545 became registered anyway — a small fraction of the more than 7.9 million registered voters in Illinois.

White’s office said all of those individuals were lawfully present in the United States. The issue did not involve any undocumented immigrants applying for a temporary visitor driver’s license.

Since they became registered, Dietrich said, 19 ballots have been cast by 16 individual voters who were improperly registered: 10 in the 2018 general election; one in the 2019 consolidated primary; and eight in the 2019 consolidated general election. Those votes occurred in Champaign, Christian, Cook, DuPage, Lee, Macon and Peoria counties and the city of Chicago. One improperly-registered voter in Chicago cast ballots in all three elections.

He added that it was not certain all 16 actually were non-citizens. “They may have checked that box in error,” he said in an email.

It was not immediately clear whether any of the races or ballot issues they voted in were close enough for their votes to have changed the outcome.

The automatic voter registration system launched on July 2, 2018. According to the secretary of state’s office, a computer programming error in that system caused people who checked “no” on the citizenship question to be included in nightly batches of voter registration applications sent to the State Board of Elections.

That programming glitch wasn’t discovered until Dec. 13, 2019, and was immediately corrected, the secretary of state’s office said. That office is now working with local election officials to remove their names from voter rolls. It is also sending letters to those individuals advising them of the mistake and admonishing them not to vote.