Three entities were introduced as “Local Legends,” and eight other area attractions, events and businesses were honored by the Great Rivers & Routes Tourism Bureau during its annual Tourism Summit held Thursday, Jan. 16 at SIUE.

From the new Grafton SkyTour at Aerie’s Resort to Willoughby Farm in Collinsville, to Worden’s redneck “Wordi Gras” event, the bureau highlighted trendsetters in tourism.

“We celebrate the champions and top achievers in tourism for 2019,” Brett Stawar, president and CEO of the Great Rivers & Routes Tourism Bureau said. “This is our chance to show the people, organizations and businesses that we recognize how hard they work throughout the year.” 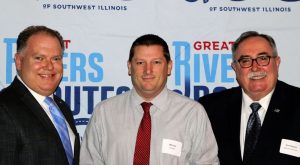 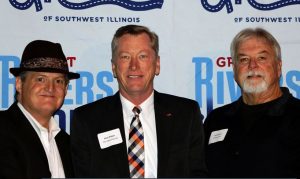 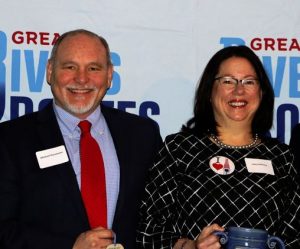 Local leaders were recognized Thursday for entities they work with that were officially listed as “Local Legends” by the Great Rivers & Routes Tourism Bureau. Top photo, Will Law is flanked by Brett Stawar, president, and John Hopkins, chairman, of the bureau. Law operates the Ariston Cafe in Litchfield, the oldest restaurant located on Historic Route 66. Bottom right is a trio recognized for their involvement in the Wildey Theatre, a vaudeville era theater restored and reopened as a public events venue in Edwardsville. From left are Al Canal, the manager, Rich Walker, with the Friends of the Wildey, and Scott Evers (accepting on behalf of Wildey historian Joan Evers). Bottom left are Mike Gasmann and Judy DeMoisy, honored for their work advocating and successfully preserving the Brooks Catsup Bottle, deemed the World’s Largest, in Collinsville.