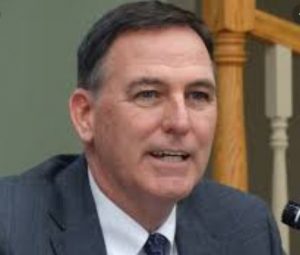 Gov. J.B. Pritzker fired Illinois Department of Agriculture Director John Sullivan for failing to take action regarding a lobbyist’s 2012 email that mentioned a rape in Champaign and ghost payroll practices.

The governor’s office said that Sullivan, as a state senator in 2012, knew about the email, but did nothing about it. Sullivan said he never read the entire email while running for election and dealing with health issues. The allegations were at the end of the email.

Jeremy Flynn, who served as chief of staff for the Illinois Department of Agriculture, took over as the agency’s acting director after Sullivan’s departure.

WBEZ broke the story about the 2012 email last week. Former lawmaker-turned lobbyist Mike McClain sent the email to members of then-Gov. Pat Quinn’s staff. In the email, McClain vouched for Forrest Ashby, a longtime state employee facing a disciplinary hearing who had “kept his mouth shut” about the rape and ghost workers.

Last week, Pritzker said he referred the allegations contained in the email to an inspector general.

“And then we’ve got to hold those accountable who are responsible for perpetuating the crime, or the cover-up, and the threats that are associated with the email,” Pritzker said.

Pritzker’s office said in a statement that Sullivan knew about the 2012 email at the time it was sent.

“Governor Pritzker sought and accepted Department of Agriculture Director John Sullivan’s resignation this weekend,” the statement said. “… the Governor holds all state employees to the highest ethical standards, and the Governor requested the Director’s resignation because he is disturbed that then-Senator Sullivan became aware of the existence of the July 31, 2012 email contemporaneously, and did not handle it appropriately, including not alerting the inspector general or other authorities.”

The statement said the governor shared all relevant information from Sullivan with the Office of the Executive Inspector General and will continue to assist in the ongoing investigation.

“Look, I want to root out all the wrongdoers,” Pritzker said last week. “I’m sick and tired of it and you all are too. The people of Illinois are sick and tired of it.”
Sullivan said in a statement posted to the political blog CapitolFax he takes responsibility.

“My search discovered a forwarded copy of a forwarded copy of McClain’s July 31, 2012 email,” Sullivan said. “Had I read the email thoroughly, my reaction would have been disgust and I would have immediately notified proper authorities. Nonetheless, the email was in my inbox and not reading the entire email led to my failure to immediately respond as I would have. Bottom line, I accept responsibility for what was truly an unintentional oversight and the subsequent inaction.”

Sullivan said he was stressed during the summer of 2012, dealing with a re-election campaign and “preparing for and undergoing cancer surgery in Baltimore.”

“I was already well aware of McClain’s efforts to keep me informed of his advocacy on behalf of Ashby, and l simply did not read the entire forwarded email,” Sullivan said in the statement.

“If a random state legislator like John Sullivan knew about McClain’s email at the time, surely there were others who knew about it and also ‘kept their mouths shut,’ “Illinois Republican Party Chairman Tim Schneider said in a statement. “It defies belief that John Sullivan knew of the email and its contents, but Speaker Mike Madigan, a close confidant of the email’s author, knew nothing.”

Madigan, D-Chicago, has said he knew nothing about the 2012 email until it was reported.

Before news of Sullivan’s dismissal, Illinois Comptroller Susana Mendoza said in an interview Monday that state leaders need to clean up the mess.

“I think we have an opportunity here to not just do window dressing on this but actually have [a] criminal investigation to bring down whoever might have anything to do [with the 2012 email],” she said.

Mendoza said there were still more questions for officials with Quinn’s administration.

A known spokesperson for the former governor didn’t immediately return a message seeking comment. WBEZ reported last week that Quinn denied knowing anything about the email before it was reported in the media.

Both Pritzker and Mendoza separately said they interpreted the email as a threat to hold over the former administration in exchange for a favor for an employee who was facing a disciplinary hearing.

“I feel that that email was almost kind of like a blackmail, if not a flat-out blackmail of the governor’s administration assuming that they knew about the so-called rape and the ghost payrolling because you don’t send an email like that unless you assume the people know what you’re talking about,” Mendoza said.

“I don’t understand exactly what the purpose of the email was, is it a threat?” Pritzker said. “It sort of seems like that, but I’d be speculating when I say that.”

The Illinois State Police and Champaign County State’s Attorney are assisting with an investigation by the Office of the Executive Inspector General into the allegations in the email.