PHOTO: A sign in Alton marks the first planting of soybeans in the state.

Illinois continues to top the annual crop production report estimate for soybean production, according to 2019 estimates by the United States Department of Agriculture.

Despite a tough growing season for most of the Midwest, Illinois farmers consistently produced strong soybean yields, all while remaining committed to stewardship and efficient crop management.

Illinois soybean farmers raised 532.4 million bushels of soybeans in 2019 on 9.86 million harvested acres with an average yield of 54 bushels per acre. Iowa ranked second in production with 501.6 million bushels raised on 9.120 million acres.

“I won’t say it was easy because 2019 will be remembered as the most challenging growing season on record for many Illinois producers,” says Doug Schroeder, soybean farmer from Mahomet, Ill., and Illinois Soybean Association chairman. “Yet, I think this report reflects the Illinois soybean industry’s resiliency and ability to produce a consistent, high quality product year after year, despite the weather and economic challenges of 2019.”

“Continuing to educate on best practices and new industry innovations makes sure that Illinois growers have a partner in maximizing their yield potential and profitability per acre,” says Wessel. “An example would be the award-winning ILSoyAdvisor platform funded by the checkoff that’s chock full of actionable, in-season advice that is making a difference with Illinois soybean farmers.”

Another large contributing factor to Illinois’ soy success is the focus on generating worldwide soybean demand. 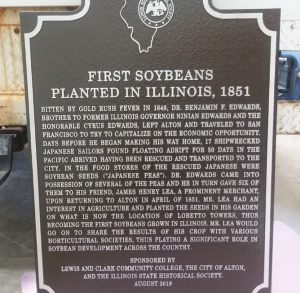 “One of ISA’s key priorities is to create marketplace preference for Illinois soy in export markets, biodiesel, animal agriculture and beyond,” says Roberta Simpson-Dolbeare, soybean farmer from Nebo, Ill., and ISA Marketing Committee chairwoman. “In 2020, you will see continued focus on nurturing existing markets and opening new. We hope to remain Illinois’ No. 1 ag export for years to come.”

To learn more about ISA efforts and the soybean checkoff, visit www.ilsoy.org.