Illinois Supply and Provisions is officially calling the first days of legalized cannabis sales in Illinois an overwhelming success and says expansion of its operations is planned.

Between its two locations in Collinsville and Springfield the vertically integrated operator served 2,990 customers over the course of the day that started at 6 a.m. in central Illinois and ended at 9 p.m. in the Metro East.  Long lines that stretched for blocks at both locations began forming on New Year’s Eve and continued well into the early evening hours of Jan. 1. 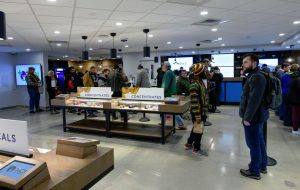 IS&P plans to open at least two additional, adult-use only, Illinois locations – one in Springfield and one in Fairview Heights – in 2020, the company said in a release.

“We are overwhelmed with the enthusiasm and energy of our first day customers. Despite the long lines, which we expected, customers were about as respectful and happy as you could want and we share in that celebration with them,” said Ascend Wellness Holdings Founder Abner Kurtin. “We have an incredibly hard working and knowledgeable team that makes the true difference with our customers.”

Over the first two days of sales, IS&P locations were able to see 5,200 customers in large part due to the logistical preparation of company staff.  While customers waited in line for hours due to the demand, the average transaction took just under 6 minutes.

“Our ability to see so many people on the first few days is really a testament to the hard work of our staff whose tireless efforts over the last several months really made a huge impact in allowing so many to participate in this historic day,” said AWH Regional Director Kathleen Olivastro.

To better serve customers in a rapidly growing market, IS&P dispensaries are undergoing complete renovations to add more square feet of floor space and point of sale positions as well as doubling its dispensary staff.