At the Agency for Community Transit Board of Directors meeting Tuesday morning, longtime Executive Director Jerry Kane, the founder and architect of the MCT Trails, announced that he is stepping down from this role as well as his position as Managing Director of Madison County Transit effective Dec. 31, 2019, and transitioning to a part-time special projects role with the agency. At the same meeting, the ACT Board unanimously approved the appointment of current ACT Director of Marketing & Planning SJ Morrison as its new executive director, effective January 1, 2020. 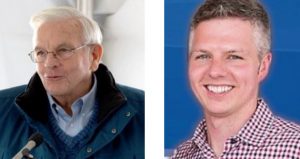 “It’s been my privilege to serve the residents of Madison County and I am grateful for all of the people who have helped along the way,” said Kane. “Our success at ACT/MCT has been a team effort. I’ve been fortunate to have had the support of a dedicated staff and dozens of board members and public officials over the years. After having spent 34 years in the service of both ACT and MCT, I’m looking forward to spending much-needed time with my family.”

Jerry Kane (left in photo) has served as the Executive Director for ACT since the organization’s inception in 1985. ACT was established to provide affordable and efficient transportation services for elderly and disabled Madison County residents. In 1986, Kane was named Managing Director of Madison County Transit, and over the course of the next ten years, assumed operation of all fixed-route transportation services. In 1993, under Kane’s leadership, MCT began acquiring former rail corridors, and pursuing state and federal grants to construct an inter-connected system of bikeways, known as the MCT Trails. Today, ACT remains the exclusive operator of all MCT services, including: the 24 public bus routes in its fixed-route system; the Runabout paratransit service for registered elderly and disabled individuals; the St. Louis region’s carpool/vanpool program known as RideFinders; and the 137 miles of scenic Class I bikeways in the extensive MCT Trails network.

“Jerry’s leadership is nothing short of visionary,” said Morrison. “His passion for building a transportation system for all people – regardless of their abilities – preceded the Americans with Disabilities Act by nearly a decade and now offers vital access for thousands of people every day. His vision for preserving the rail corridors and constructing the MCT Trails has created one of the most extensive system of bikeways in the country.”

SJ Morrison (right), who will assume the position of Executive Director for ACT on Jan. 1, has worked at ACT for more than fifteen years. He began his career at ACT as a marketing intern in the summer of 2003 and was hired as a full-time marketing assistant in June 2004. Three years later he was named ACT’s Director of Marketing and soon after also became the Director of Planning and the manager of the RideFinders regional rideshare program. Morrison leads a team at ACT which is responsible for developing and distributing all public information and marketing

materials, oversees bus route planning and scheduling, operates the RideFinders program, plans and hosts agency events, and manages transit automation equipment and programs. Morrison also writes and assists with the administration of federal grants, represents ACT/MCT at regional boards and meetings, and manages projects such as the design and deployment of a new automated fare collection system.

“These are incredibly big shoes to fill, and I’m honored by the Board’s confidence in my ability to guide ACT,” said Morrison. “I share Jerry’s love for the people we serve and am grateful for the opportunity to build on the foundation he has laid.”

“ACT will be in very good hands,” said Kane. “SJ knows our system better than anyone, he’s familiar with our unique challenges and he has the experience and energy to lead this agency.”

In addition to other regular business, the ACT Board also recognized seven drivers for 10 consecutive years of perfect safety while driving a public transportation vehicle. Those drivers included five fixed-route operators: Eddie Andrews, Teresa Foley, Barb Fults, Sheri Hill, and Donna Sims; as well as two paratransit operators: Marne Avello and Dana Clemons. As defined by the National Safety Council, to retain the ‘perfect safety’ designation, drivers must, in all situations, make every effort possible to avoid an accident.  Over the course of the last ten years, these drivers have each logged more than 20,000 hours behind the wheel of a transit vehicle without a preventable accident.