After more than 70 years of failed attempts to remedy the patchwork of first responder pension plans across the state, Gov. JB Pritzker signed a new law Wednesday to consolidate the 649 downstate and suburban plans into two statewide funds. 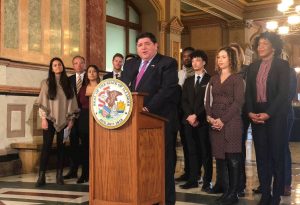 “Bipartisanship in this General Assembly has achieved what none of their predecessors have been able to do: consolidate the 650 downstate and suburban pension funds to just two, amplifying their investment power and reducing the burden on property taxpayers,” said Gov. J.B. Pritzker. “Working together, we are helping hundreds of cities in Illinois alleviate their spiraling property tax burdens, and just as importantly, we’re showing that Illinois can tackle its most intractable problems.”

The new funds will leverage their collective buying power of $15 billion in assets – $8.7 billion in the police fund and $6.3 in the fire fund – to increase investment returns and lower management costs. Helping lower the pressure on local property taxes, the consolidation is estimated to produce greater returns of $820 million to $2.5 billion over the next five years alone and billions more over the next 20 years.

Senate Bill 1300 passed in the fall veto session with strong bipartisan majorities and the support of the Associated Fire Fighters of Illinois, the Illinois Fraternal Order of Police, the Illinois Municipal League and the countless cities, towns and villages across the state they represent.

“The number one budget issue legislators have been dealing with for decades is the pension crisis,” said Sen. Cristina Castro, D-Elgin, the Senate sponsor of the measure. “We got a victory today with this consolidation plan, but there’s still a lot of work to be done.”

“This is a commonsense proposal that will solidify police and fire pensions throughout the state,” said House Assistant Majority Leader Jay Hoffman, D-Swansea), the House sponsor of the measure. “By combining the investment power of the funds, they will receive an increase in investment income and will relieve the pressure on local property taxes. The Governor should be commended for his leadership in this important issue.”

“Consolidating these 649 local plans into two statewide funds for investment purposes will reduce expenses and maximize performance — and most importantly, secure our first responders’ futures,” said Associated Fire Fighters of Illinois President Pat Devaney. “Firefighters deserve to know their retirement will be there and taxpayers should finally be confident it’s being funded in the most efficient manner, and this new law signed by Gov. Pritzker moves us toward a financially stable future for every Illinoisan.”

“Lawmakers from both parties and Governor Pritzker’s office truly listened to police officers’ concerns and put in a lot of hard work to get this final bill right,” said Illinois Fraternal of Police Board Chairman Tim Kobler. “The law will let police officers control the retirement funds for their fellow officers, and it addresses the root causes of the pension dilemma rather than resorting to the same old game of just cutting benefits. The end result will benefit taxpayers and officers alike.”

“This legislation represents a balanced approach based on thoughtful discussion and compromise among the interested parties after decades of underperformance of these many funds,” said William J. Brodsky, former Chairman and CEO of the Chicago Board Options Exchange and now Chairman of Cedar Street Asset Management, LLC. “The goal was to maximize the returns for the benefit of the first responders and their families and to minimize the costs to those who fund the pension plans: the taxpayers of Illinois. The leadership of Governor Pritzker was the catalyst that allowed this to happen.”

“There is universal agreement that larger pooled investments enjoy lower fees and have more opportunity to invest in higher earning investments,” said former Senate Republican Leader Christine Radogno. “Consolidation of Illinois’ 650 funds into two funds will allow the administrative and fee savings and better returns to be plowed back into the funds for the benefit of retirees and taxpayers.”

Local pension boards will continue to administer pension benefits, and no assets or liabilities will be shifted from one local pension plan to another. The new law also brings Tier 2 pensions into compliance to avoid future additional liabilities, which is estimated to cost $70 to $95 million while projected investment gains can generate an additional $820 million to $2.5 billion.

PHOTO: Pritzker at a pension press conference earlier this fall.