State Sen. Jason Plummer, R-Edwardsville, and state Rep. Charlie Meier, R-Okawville, teamed up in the recent session to urge the legislature to secure state funding to make repairs and improvements to the Kaskaskia Watershed. 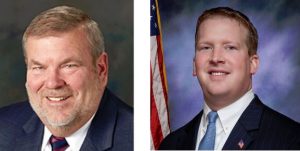 “The Kaskaskia Watershed is vital to the economy in southern Illinois,” said Rep. Meier (shown left). “These funds will be used to restore and protect the Watershed from further erosion, resulting in the prevention of flooding at Scott Air Force Base and improving the waterway for barges that ship goods down the river.”

The United States Congress established the Kaskaskia Watershed Restoration Act in 2007 and authorized $20 million for critical projects after a Comprehensive Plan is developed. The Comprehensive Plan is stalled due to the lack of financial support from the State of Illinois. Rep. Meier and Sen. Plummer are requesting $300,000 to be included in the upcoming state budget in order to complete the plan and to leverage federal funding to protect the Watershed.

“Time is of the essence, it’s critical the state allocate much needed funding to protect the Kaskaskia Watershed,” Plummer (shown right) said. “It generates over seven million tourists, $162 million from tourism and nearly 560,000 people rely on the Watershed as their primary source of drinking water.”

The Kaskaskia Watershed encompasses 10.2 percent of the State and includes all or parts of 22 counties. The Watershed starts in Champaign County and ends at the Mississippi River in Randolph County, including three authorized Corps projects, Lake Shelbyville, Carlyle Lake, and the Kaskaskia Navigation Project.