Centralia attorney B. Marshall Hilmes is running for state’s attorney in Clinton County.  Hilmes will run in the Republican primary election on March 17. 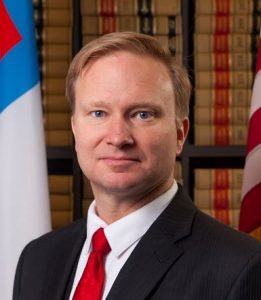 Hilmes, 48, began his legal career before law school, as a court appointed special advocate (CASA) representing abused children, as a guardian ad litem. He earned his associate’s degree from Southwestern Illinois College, his bachelor’s degree from Southern Illinois University, and his Juris Doctorate from Saint Louis University, School of Law (Catholic). While he attended college, he was employed by UPS. He is a member of the Sons of American Legion Trenton Post 778, NRA, and National Republican Lawyers Association.

Currently, Hilmes is in the private practice of law with multiple public service commitments including municipal prosecutor, municipal city attorney, arbitration hearing officer for the state and municipal zoning and hearing officer.

Hilmes lives with his wife Debora. They have three adult children, a godson, two granddaughters, a grandson and soon to be another grandchild. Both of their sons have served in the U.S. Navy.

He submitted this statement:

“I will work hard to ensure justice for all people, and to fairly apply the rule of law,” he said. “As an assistant state’s attorney, I had over 100 felony cases assigned to me at a time.  I volunteered on evenings and weekends to work directly with law enforcement on the streets and in trial preparation.  As a city attorney, I work with police to make sure criminal convictions are not improperly expunged, sex offender laws are enforced, and ordinances are enforced. I have consistently worked to be a voice in the courthouse and a reminder of the hard work that law enforcement performs.  It truly is an honor to be a candidate to an elected office and to speak for the hardworking families of Clinton County. If you elect me, you will have someone who will use his 14 years of dedication, training and experience to keep you and your family safe.” When asked about his opponents he said “Voters have the responsibility to nominate a State’s Attorney who is the most qualified and experienced for the job. In addition to being an Assistant State’s Attorney, I went out on my own, established my own successful law practice, and have made countless decisions as a sole practitioner, hearing officer, and City Attorney. Although there is no residency requirement to live in Carlyle, by the courthouse, I plan on moving closer so that the police will have easier access to me at all times. If you compare all of us, you will find I have the most experience, most training and am most qualified for the state’s attorney position.”