Launched in 2014 with just three employees, Atlas 46 entered the St. Louis region’s manufacturing scene with a commitment to design, develop and manufacture innovative American-made, premium workwear and gear designed to stand the test of time for members of the construction industry. 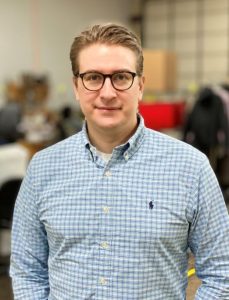 In the five short years since, the company’s product line has expanded to serve a range of other industries, including carpentry, electrical, maintenance, off-roading and DIY, driving sales from just $171,000 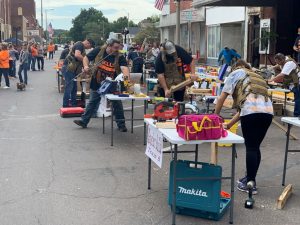 With a workforce that now totals 150 across three locations, including Fenton, Mo., and Hillsboro, Ill., the fast-growing company’s success is being guided by a father and son leadership team that stitches together two distinctly different skill sets, positioning Atlas 46 as a front runner in the highly demanding world of personal work-wear goods. 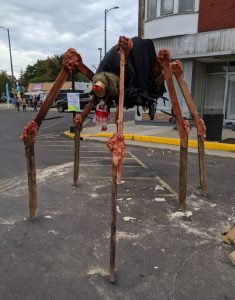 With more than 45 years of experience building companies and delivering performance, Atlas 46 founder John Carver has demonstrated his entrepreneurial success with a proven track record for business growth and product development across small, medium and large businesses. Carver and his mother, Lorene Pyles, began operations in the basement of her St. Louis home in 1974 where they produced nylon gear for motorcycle racing, including assorted bags, fanny packs, motocross pants and a variety of other related gear.

Three years later, the company redirected its product focus to fill a noticeable void in the availability of quality tactical nylon products for military and law enforcement. Those start-up operations ultimately became Eagle Industries, the company Carver founded in 1982 and grew to more than 2,500 employees working in five manufacturing facilities across the country. The company was producing revenue of approximately $120 million annually before Carver sold it 2009.

While John and his wife Gretchen began spending eight months out of the year on their ranch in Montana after the sale, Carver’s deep roots as a handyman and woodworker, along with a strong desire to continue creating the highest quality products to meet new needs he was identifying, drew him back to the sewing table and paved the way for the launch of Atlas 46. 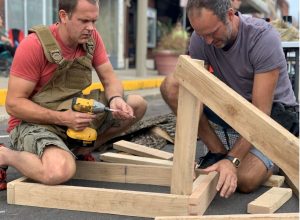 “My biggest joy is customer satisfaction, and a key driver behind starting Atlas 46 was my passion for creating innovative products, this time for those in the construction industry,” said Carver. “My motto has always been, listen to the customer, build what they ask for, and build it to last.”

Atlas 46 commenced operations at the beginning of 2014 in Fenton, Mo., with an initial focus on designing and developing its own branded Atlas 46 workwear and gear for those in the construction trades. With a research and development team led by Carver, Atlas has incorporated many of the military concepts into its gear that is built to be as reliable and durable as the professionals that depend on them every day.

It was when son Brian Carver joined the Atlas 46 team in 2015 that business really began to take off. Brian leads the company’s initiatives for online sales and incorporating technology into the manufacturing process. Since joining Atlas 46, these initiatives have significantly contributed to the growth of Atlas-branded product sales by creating a rapid, successful direct-to-consumer channel and implementing operational technology into the production facility, increasing efficiency by more than 35%. Earlier last year, the company also expanded into Hillsboro, Ill., where they are excited to be reintroducing manufacturing jobs into a community that was devastated by spillover effects from the closure of Deer Run Coal Mine. As part of the company’s strategy for balanced manufacturing, they are now partnering with four production plants across the nation that share their vision of quality goods made here in the United States.

Space on John’s ranch in Judith Gap, Mont., continues to house the company’s R&D facility, and its location on the 46th Parallel inspired the company’s name, with Atlas symbolizing the strength of the products.

“Creating jobs and opportunities in the US workforce while producing goods for other hard-working Americans is something we are especially proud of and relates back to our strong history of developing and producing gear for the U.S. military and Special Forces community,” said Brian Carver, CEO of Atlas 46. “It’s great to see that people want to purchase American-made products that are built with the highest quality materials, and that’s what drives us to continue our push for innovation and quality, ultimately setting us apart from the competition.”

Joining Brian and John in delivering that innovation and quality are team leaders Keith Ericson, VP of Atlas 46, and Quincy Egert, director of sales and marketing. Prior to joining Atlas, Ericson served as lead designer and director of marketing under John Carver at Eagle Industries and today serves as lead designer for Atlas 46.

Egert leads a team responsible for continued exponential growth of the expanding Atlas 46 brand nationally and globally, boosting the percentage of international sales to nearly 25 percent  this year.

Now on target to hit sales between $11-$12 million in 2020, Atlas 46 anticipates adding another 20-30 employees by the end of next year. As the company continues to grow, so does its expanding product line. While products like the Saratoga Tool VestTM with its multitude of customizable accessories may have put Atlas 46 on the map, the company has learned that tradesmen often elect to be outfitted in workwear because it is built to provide durability and safety. To meet its customers’ unique needs, Atlas 46 has revamped its workwear line to offer a broader range of items that will fit into their “Work-to-Weekend” strategy moving forward.

“Our commitment to quality is evident throughout our entire process,” said Brian Carver. “We use Mil-Spec materials and sewing standards in all of our products to ensure we provide our customers with not only a lasting product, but also one that won’t fail when under the stress of the job it was intended for.”

Some of these new items include duffel bags and jeans. The company plans to continue adding other general consumer products to this line, offering customers items that are not only rugged enough for the jobsite but fashionable enough for a casual night out.

With locations in Fenton, Mo., and Hillsboro, Ill., Atlas 46 designs, develops, and manufactures innovative, premium workwear and gear for the construction, carpentry, electrical, maintenance, off-roading, DIY, and woodworking industries. The company was established in 2013 by founder and owner John Carver and is well-known nationally and internationally for its innovative work-gear and patented system that allows users to arrange and rearrange pouches based on their needs

TOP  LEFT:  Team members race to beat the clock during the Competitive Monster Building contest hosted by Atlas 46 as part of the 5th Annual Harvest Market in historic downtown Hillsboro, Ill., in October. The nine participating teams were tasked with building a free-standing monster in the two hour time window, requiring the creations to made out of provided materials and stand a minimum of four-feet tall.

BOTTOM LEFT: Aaron Rupert, left, and Seth Huber, right, busy at work in the early stages of building their 7-foot tall spider creation, which ultimately took home the $1,000 grand prize during the Competitive Monster Building contest hosted by Atlas 46 as part of the 5th Annual Harvest Market in historic downtown Hillsboro, Ill., in October.  The nine participating teams were tasked with building a free-standing monster in the two hour time window, requiring the creations to made out of the provided materials and stand a minimum of four-feet tall.