Illinois advocates and federal lawmakers expressed optimism after news that a trade deal between the United States, Canada and Mexico would move forward in Washington.

House Speaker Nancy Pelosi announced Tuesday that she would soon vote on the trade deal signed earlier this year by leaders from the three countries. The announcement came hours after Democrats announced articles of impeachment against President Donald Trump.

“There are some people who said ‘why make it look like he has a victory?’ Well, we’re declaring victory for the American worker in what is in this agreement,” Pelosi said, her caucus taking credit for a number of changes made from the initial proposal by Trump’s administration. “Not any one of us is important enough to hold up a trade agreement for American workers.”

U.S. Rep. Jan Schakowsky, D-Evanston, stood with Pelosi for the announcement. Schakowsky was the point person for instituting changes to the agreement that she said, left unchanged, would have given the pharmaceutical industry a significant gift at the cost of consumers.

“The Trump Administration sent us a deeply flawed trade deal that would have raised the price of pharmaceuticals across North America,” she said.

Republicans said they were hopeful that Pelosi will quickly call the agreement for a vote in the House.

“It’s important we pass the USMCA before Congress adjourns for the year,” said Rep. Rodney Davis, R-Taylorville. “We need to show our allies that we can keep our promise and ratify trade deals negotiated between our governments.”

Peoria Republican Darin LaHood said on Twitter that the agreement was great news for Illinois farmers, manufacturers and small businesses.

“Over 40 percent of the products we grow and produce in Illinois go to Mexico or Canada, and this 21st-century trade agreement will maintain and strengthen the open market free flow of goods that is so vital for our agriculture community in the Midwest,” he said.

“This is excellent news for Illinois Farm Bureau and Illinois farmers,” Illinois Farm Bureau President Richard Guebert said. “We are appreciative of the work by Speaker Pelosi and U.S. Trade Representative Robert Lighthizer to reach an agreement to move this important trade deal to a vote before Congress adjourns in December.”

IFB Vice President Brian Duncan said it was time for farmers to call their local member of Congress to urge a quick vote.

“Farmers, get your Congressman’s phone number and get ready to call,” he said.

Illinois’ manufacturing sector was also pleased, though a trade group said that the industry didn’t get all it wanted.

“We think there could have been a little higher standards set for the protection of intellectual property, which is extremely important for some of our innovators and high-tech sectors who think that could have been strengthened,” Illinois Manufacturers Association President Mark Denzler said. “Overall, we’re just extremely pleased that they’ve all come together in agreement, it appears.” 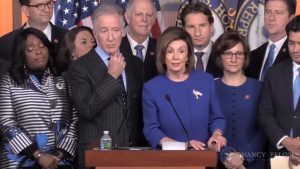