SPRINGFIELD — The Trump administration is about to impose new regulations that would tighten eligibility rules for the Supplemental Nutrition Assistance Program, also known as food stamps, in a way state officials say could cut off benefits for an estimated 140,000 Illinoisans.

The new rules apply to a category of SNAP recipients ages 18 to 59 known as “able-bodied adults without dependents,” or ABAWDs. Currently, who meet the program’s income eligibility limits are limited to three months of benefits during any 36-month period unless they work at least 20 hours a week or are enrolled in a job training program. 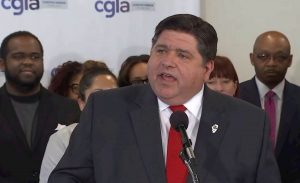 Those conditions were part of a 1996 welfare reform law passed during the Clinton administration. But the law also allows states to waive the work requirements if the applicant lives in an area marked by high unemployment or where there is a lack of sufficient jobs.

The new rules, which will take effect in April, will tighten the regulations governing those waivers by limiting them to counties with unemployment rates above 6 percent. It is one of several changes to SNAP eligibility being implemented or considered by the Trump administration.

The U.S. Department of Agriculture, which administers the program, said in a document published Wednesday that about half of all able-bodied adults receiving SNAP live in areas that have received waivers “despite low unemployment levels across the majority of the country.”

“The strong economy is creating opportunities for all,” U.S. Agriculture Secretary Sonny Perdue said during a telephone news conference Wednesday. “Now is the time for us to engage with this subset of SNAP participants so that they can know the dignity of work and the lasting transformation that it provides.”

But Democratic Gov. J.B. Pritzker blasted the new rules, calling them “cruel” and suggesting they are being enacted for other political purposes.

“President Trump is now resorting to the ugliest possible tactics to distract the American people from his impeachment and gin up support from the far right – denying food to the most vulnerable people in our society,” Pritzker said in an email statement. “This is cruel and my administration has fought him at every turn.”

USDA estimates the rule change will make about 668,000 people nationwide ineligible for SNAP, resulting in an estimated $5.5 billion savings over five years.

Meghan Powers, spokeswoman for the Illinois Department of Human Services, said about 140,000 people in this state would lose eligibility, although she added the agency has been working to find other ways to extend eligibility to those individuals.

“Many SNAP participants face serious barriers to employment, such as mental illnesses, substance use disorders, justice involvement and significant physical limitations, and would not be able to immediately meet the work requirements,” she said in an email statement. “IDHS has been working for months to appropriately exempt any individuals with these barriers so they do not need to meet the work requirements. However, we also recognize that some of our customers can and want to work. To that end, IDHS has also engaged in a robust effort to prepare for this rule change so we can help as many SNAP participants as possible find employment and training that would meet the work requirement.”

PHOTO: Gov. J.B. Pritzker speaks during a signing ceremony Wednesday in Chicago of a trailer bill approved during the fall veto session clarifying aspects of the legalization of recreational marijuana. Pritzker on Wednesday also took weighed in on new federal regulations that could cut off access to food stamps for an estimated 140,000 Americans. ““This is cruel and my administration has fought (President Trump) at every turn,” Pritzker said. (Credit: blueroomstream.com)