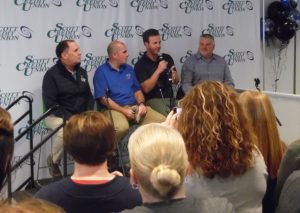 Blues Checking will be a free, high-rate checking account that offers the opportunity for accountholders to earn up to 4.05 annual percentage yield on their balance up to $25,000.

Credit union members will receive a 10 percent discount on Blues merchandise at the Team Store at Enterprise Center when they use their Blues debit card.

Scott Credit Union announced the news to employee at an event at SCU’s Home Office.

“We are proud to announce that we have extended our partnership with the Blues to soon begin offering Blues Checking and debit card. This is really two championship teams working together,” President and CEO Frank Padak told the crowd during the event, which featured a panel discussion with Blues broadcasters Kelly Chase, John Kelly, Chris Kerber and Joey Vitale.

Padak noted that Blues Checking will be part of the credit union’s strategy to grow its membership in Illinois and Missouri. Scott Credit has 14 locations in Illinois and has opened branches in Ladue, Crestwood and Ferguson on the Missouri side of the river.

“This is a great opportunity to grow our business on both sides of the river with the excitement of the Blues coming off their Stanley Cup Championship,” he said.

“This partnership is important to us because it really expands our brand further on the Illinois side of the river,” Zimmerman told the crowd. “With Blues Checking, people from throughout the region can really show their pride in the St. Louis Blues.”

Scott Credit Union began its partnership with the Blues before the beginning of last season.

SCU’s agreement with the Blues also includes naming rights to the exclusive Rinkside Club & Pub 67 inside of Enterprise Center and advertising in the venue.

“Now, the expanded agreement includes the checking account and debit card for the next five seasons,” Padak added. “We are thrilled to be adding to our partnership with all of the excitement in the St. Louis community about the Blues Stanley Cup win.”

Scott Credit Union also has a partnership with the St. Louis Cardinals.

“We are extremely proud to be a partner with such tremendous organizations,” Padak noted.