Work will be non-cosmetic, ‘functional’ in nature

SPRINGFIELD – Democratic Gov. J.B. Pritzker is planning to spend $40,000 of his own money to renovate his State Capitol office next month, according to a news release distributed by his staff.

Those changes will be mainly functional, however, with no major changes planned for the carpeting, wallpaper, furniture or other cosmetic areas.

“The Office the Governor in Springfield will undergo renovations beginning the week of Dec. 10 with the goal of improving functionality for staff. It is expected to conclude before the end of the year,” Jordan Abudayyeh, Pritzker’s press secretary, said in a statement last week.

Abudayyeh said the work will take place in the governor’s second-floor Capitol working office, as well as in the reception area outside of it. The renovations will include soundproofing in the office and installation of a partition to make the reception area “more accessible to staff.”

The governor’s staff said the changes to the reception area, which is the public-facing office space visible through plate glass windows on the Capitol’s second floor, are temporary and can be easily removed at a future date.

According to a news release, the administration worked with the Architect of the Capitol to ensure modifications “will not compromise the historical integrity of the office.”

The “ceremonial office” – an area which frequently hosts news conferences and is complete with a 1918 Robert Root painting of an 1858 debate between Abraham Lincoln and Stephen A. Douglas – will be unaffected by the renovations.

Pritzker’s office also said the work will be done by a union firm and union subcontractors. 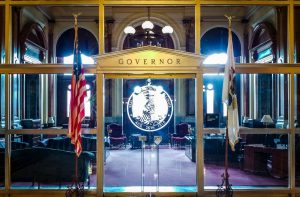 PHOTO: The governor’s office and reception area on the second floor of the Capitol in Springfield will undergo renovations next month, Gov. J.B. Pritzker’s office announced last week. The renovations, which will be functional rather than cosmetic, are expected to cost $40,000 and will be paid for by Pritzker, according to a news release. (Capitol News Illinois photo by Jerry Nowicki)