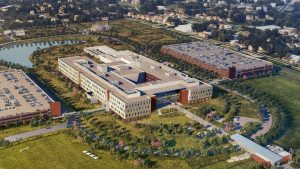 The National Geospatial-Intelligence Agency will break ground in a ceremony Tuesday for its new campus in north St. Louis .

The ceremony will take place at 10 a.m.

“The new campus will be a secure, flexible, cutting-edge intelligence facility that will put NGA in the heart of St. Louis’ growing geospatial ecosystem and help NGA take advantage of its biggest strengths, its people and partners,” said NGA Director Vice Admiral Robert Sharp.

The new NGA campus will be located at the corner of Jefferson and Cass avenues. The north St. Louis location puts NGA in the heart of a community of outstanding academic institutions and cutting-edge industry. It is scheduled to be open and fully operational by 2025.

“NGA’s new campus will be built with spaces that will facilitate information-sharing and collaboration among NGA’s and St. Louis’s talented innovators,” Sharp said. “Working together, we can better achieve NGA’s mission of providing world-class geospatial intelligence to U.S. service members and leaders to keep our nation secure.”

The new facility will include approximately 712,000 square feet of office space, parking garages, a visitor’s center, an inspection facility and control access points. Plans are for the facility to include wireless technologies – which, while standard in private industry, has been a challenge for the intelligence community to adopt for a secure, classified work environment — and for the facility to be built to Leadership in Energy and Environmental Design, or LEED, Silver standards for environmental sustainability.

Preparations for the new facility have been ongoing with NGA’s partners since NGA announced its selection of north St. Louis as the site in 2016. The City of St. Louis officially transferred the 97 acres of land for the new NGA campus to the U.S. Air Force in December 2018. St. Louis-based McCarthy Building Companies and Falls Church, Va.-based HITT Contracting were selected as the design-build team leading the construction in March 2019.

With the groundbreaking, the U.S. Army Corps of Engineers will begin managing the construction on behalf of NGA.

“This groundbreaking is a testament to the thoughtful planning, hard work and good faith of NGA’s people and partners in the St. Louis area, Missouri and across the county,” Sharp said.

“NGA has been proud to call St. Louis home for the past 70 years,” Sharp said. “I’m excited to see what NGA’s people and partners in the St. Louis region can accomplish together for the next 70.”​

Rendering of the future NGA facilities in St. Louis, courtesy of McCarthy HITT.