Rehm will share her insights on what she has learned through a lifetime of conversations. The program will begin at 6:30 p.m. in the Meridian Ballroom; doors will open at 6 p.m.

“We are excited to welcome Diane Rehm, a recipient of the Presidential Medal for Humanities, to the MJCHF Annual Distinguished Leadership Dinner,” said MJCHF Founder and President Mannie Jackson. “It is a perfect connection for the work we are doing to impact and change the way leaders think and behave through humanities inspired leadership.”

Diane Rehm is a native Washingtonian, who began her radio career in 1973 as a volunteer for WAMU 88.5, the NPR member station in Washington, D.C.

In 1979, she began hosting WAMU’s local morning talk show, Kaleidoscope, which was renamed The Diane Rehm Show in 1984. It grew from a local program to one with international reach and a weekly on-air audience of more than 2.8 million. Topics ranged from the U.S. economy and foreign affairs to literature, science and the arts. Many of the nation’s prominent newsmakers, journalists and authors have appeared on her program, including then-Sen. Barack Obama, former presidents Bill Clinton and Jimmy Carter among others.

Rehm now brings her unique mix of curiosity, honesty, intimacy and nearly 40 years as a radio host to the podcast world. Listen weekly to “On My Mind” for Rehm’s conversations with newsmakers, writers, artists and thinkers on the issues she cares about most: what’s going on in Washington, ideas that inform, and the latest on living well as we live longer.

In 2014, President Barack Obama presented Rehm with the National Humanities Medal. Newsweek magazine named The Diane Rehm Show as one of the most interesting talk shows in the country. National Journal says Rehm is “the class act of the talk radio world.” In fall 2013, the program was identified as one of the most powerful programs in public radio based on its ability to draw listeners to public radio stations.

In 2010, Rehm won a Personal Peabody Award, considered among the most prestigious and selective prizes in electronic media, for her 30+ years in public broadcasting. Rehm has been also named “Washingtonian of the Year,” and one of the “150 Most Influential People in Washington” by Washingtonian magazine. She’s been included several times on the magazine’s list of the “100 Most Powerful Women,” and as the daughter of Arab immigrants, was selected as Arab American of the Year by ACCESS in 2013. 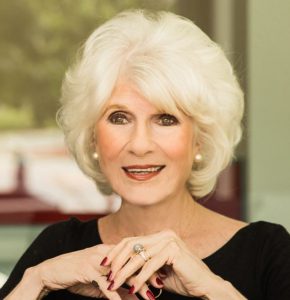 In 1998, Rehm’s career nearly ended because of spasmodic dysphonia, a neurological voice disorder that causes strained, difficult speech. Rehm sought treatment, returned to the show, and called attention to the condition. The National Council on Communicative Disorders recognized her work with a Communication Award, and ABC’s Nightline devoted an entire program to a conversation with Rehm about her disorder. In 2011, Rehm was awarded the Voice Education Research Awareness (VERA) Award from The Voice Foundation for her sustained contributions to the field of voice communication.

Rehm is the author of four best-selling autobiographical books: “Finding My Voice,” in which she describes her childhood, marriage, career and voice disorder; “Toward Commitment: A Dialogue about Marriage,” a deeply personal book co-authored with her husband, John; “Life with Maxie,” a lighthearted story about her dog; and her most recent book, “On My Own,” a moving story about the death of her husband of over 54 years and her struggle to reconstruct her life without him.

MJCHF also announced that it will be presenting the inaugural Leadership and Humanity awards at this year’s event.

Tickets, which include dinner and a program, are $200 each and are available online at www.mjchf.org/rehm. Previous events have sold out, so be sure to reserve your spot today.  Those interested in sponsorship opportunities or group sales should contact MJCHF Executive Director Sarah Melinger at (618) 655-2890.

PHOTO: Award-winning radio host and bestselling author Diane Rehm will be the featured speaker at the MJCHF Annual Dinner and Fundraiser, Feb. 19, 2020.