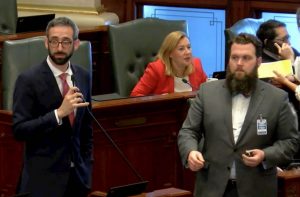 PHOTO: Rep. Will Guzzardi, D-Chicago, speaks on the House floor Wednesday at the Capitol In Springfield during debate about legislation that would cap the cost of a 30-day supply of insulin at $100 for those with state-regulated health care plans. The bill, which Guzzardi sponsored in the House, passed and will be sent to Gov. J.B. Pritzker, who has been a vocal supporter of the measure. (Credit: blueroomstream.com)

SPRINGFIELD – The Illinois House voted with an overwhelming majority Wednesday to advance a bill aimed at capping the out-of-pocket cost of prescription insulin for state-regulated health insurance plans.

Senate Bill 667 passed 100-13 with one “present” vote. The House amended a portion of the bill pertaining to a required report on the cost of prescription insulin, so it will go back to the Senate for a vote before it can head to the governor. It already passed that chamber 48-7 on Oct. 29.

Democratic Gov. J.B. Pritzker has been a vocal supporter of the measure and has said he would sign it.

The bill would cap the price for a 30-day supply of insulin at $100 for people covered under certain kinds of insurance policies. It would not limit how much drug companies can charge for insulin, but would force insurance companies that would be covered by the new law to pick up a larger share of the cost.

Chicago Democratic Rep. Will Guzzardi, the bill’s sponsor, said in committee Tuesday it would apply to those purchasing insurance on the marketplace, as well as public plans such as the state employee health program. He added it would apply to roughly 20 percent of Illinois’ population, affecting about 260,000 of an estimated 1.3 million insulin users.

It would not apply to plans offered by large employers that are governed by the federal Employee Retirement Income Security Act because, Guzzardi said, the state cannot preempt federal law.

The bill faced questioning from Rep. Tom Demmer, R-Dixon, who said it would make Insulin the only prescription drug with a cost regulated by state law.

“It’s an important distinction to make, that we’re talking about setting a new precedent, creating a new path that individuals might come to Springfield and suggest that if we did this for insulin, that maybe we could do this for any number of any other prescription drugs,” he said.

Demmer also said some insurance plans might choose not to cover insulin, but Guzzardi cited studies which said a similar price cap in Colorado had “negligible effects on the insurance market,” and pointed out that the insurance industry groups were “neutral” on the bill.

But Rep. Deanne Mazzochi, an Elmhurst Republican, warned the bill would only shift costs around in the form of higher deductibles and premiums.

“The reason industry players are neutral on this bill is because they know it’s really not going to cut costs, it’s going to make a redistribution of costs. It’s going to shift them from one player to the other, but the players are still going to get paid,” she said.

She said the only way to drive costs down is to have more competitors offering generic versions of the drug.

While Guzzardi said the bill addresses a “symptom, not the cause,” of higher drug prices, which he attributed to price hikes by manufacturers, he said this is an action that can be taken now to address the price for some Illinoisans.

The concurrence heads to the Senate, where it is expected to be heard before the veto session adjourns Thursday. The amendment up for vote in the Senate directs the Illinois Department of Insurance, rather than the Attorney General’s Office in a previous version of the bill, to investigate why insulin prices have been rising sharply in recent years.