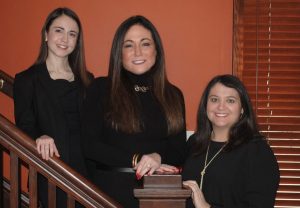 She worked as an intern for the Federal Public Defender’s Office and the Douglas County, Neb., Pretrial Release Program in law school, working with criminal offenders to obtain early release and assisting offender with work placement.

Embrich is licensed to practice law in Illinois and Missouri and is also a mediator in the state of Illinois. She concentrates her practice in the areas of family law, probate, will, and power of attorney preparations.

She and her husband and two children live in Swansea.  She works regularly with the Junior Service Club of St. Clair County and is a past member of the organization’s board of directors.

Prior to joining Sherer Law Offices, she was an assistant public defender in St. Louis City, trying more than a dozen jury cases through to verdict and representing clients at all stages of criminal proceedings. Sarah is licensed to practice law in Illinois, Missouri, and New York and in Federal Court in the Southern District of Illinois.  She concentrates her practice in the areas of criminal defense, DCFS proceedings and appeals, juvenile adjudication, civil defense, and guardian ad litem work. She is also the Assistant Director at an overnight summer camp and brings her knowledge and background working with children of all ages into her legal practice.  She is one of the coaches for the Washington University Moot Court team and a member of the Inns of Court professional group.