Cyber professionals serving with U.S. Transportation Command  at Scott Air Force Base epitomize the overarching message of this year’s National Cybersecurity Awareness Month, observed in October, of Own IT, Secure IT, Protect IT.

Last month, they received recognition from the National Security Agency for setting the standard in securing, safeguarding, and strengthening the global, warfighting combatant command’s cyber networks.

USTRANSCOM’s Cybersecurity Service Provider team, comprised of several hundred military and civilian members representing the command’s Intelligence, Operations, and Command, Control, Communications, and Cyber Systems Directorates, earned the NSA’s 2018 Frank B. Rowlett Trophy for Organizational Achievement.  The honor, awarded to a USTRANSCOM cyber program for the sixth time since 1997, recognizes the federal government organization that makes the most significant contributions to the improvement of national information systems security, operational information assurance readiness, or the defensive information operations posture of the U.S.

“USTRANSCOM has demonstrated its capability to defend command and control systems and provide critical capabilities to the warfighter. We’ve also kept examining how to improve the security of our networks by continually assessing vulnerabilities and gaps,” said Patrick Grimsley, deputy chief of Defensive Cyber Operations/Department of Defense Information Network Operations, Command, Control, Communications, and Cyber Systems Directorate, TCJ6, and a member of USTRANSCOM’s awarded CSSP team. “We’re always learning what it takes to get better. It’s about continuous improvement.”

Milestones achieved by USTRANSCOM’s CSSP team cited in the 2018 Rowlett Trophy for Organizational Achievement included defending a multitude of network assets from myriad attacks with no known breaches, identifying numerous procedural flaws, which resulted in the execution of hardening actions to increase the security of the command’s cloud environment, and transitioning over 70 programs to cloud computing. In addition, since the majority of USTRANSCOM’s cyber networks operate in the unclassified domain, and the command conducts its mission of global force projection and sustainment with significant support from commercial transportation providers, the team also evaluated the cybersecurity posture of more than 50 industry carriers.

“We’re employing the internet to conduct much of the command’s business, and as a result, it’s increasingly difficult to defend due to the exposure of many endpoints,” stated U.S. Air Force Capt. Christopher Gheen, executive officer to the TCJ6 director and USTRANSCOM CSSP member. “We’ve also partnered with industry to enhance our respective cybersecurity processes, procedures, and practices.”

In addition to USTRANSCOM’s Rowlett Award for Organizational Achievement, the leader of the command’s CSSP team, Tina Burton, was named first runner-up for the Rowlett Trophy for Individual Achievement. She received the honor for her leadership in enhancing USTRANSCOM’s cybersecurity measures and information assurance workforce.

“It’s all about the readiness of our cyber force. It’s a much greater honor to win as a team. You cannot conduct cyber operations on an individual basis,” said Burton, deputy CSSP manager, TCJ6. “We work together with the Intelligence (TCJ2) and Operations (TCJ3) Directorates to ensure all the cybersecurity i’s are dotted and the t’s are crossed.”

Established 30 years ago, these annual awards for outstanding organizational and individual excellence in cybersecurity are named for American cryptologic trailblazer Frank B. Rowlett, who served as a founding father of NSA in November 1952.

“We continue to educate USTRANSCOM’s workforce about cybersecurity. Our commander, U.S. Army General Stephen Lyons, has stated “a keyboard is a weapon” in reference to every command member utilizing the cyber networks,” Grimsley stated. “Ultimately, cybersecurity is everyone’s responsibility.”

USTRANSCOM exists as a warfighting combatant command to project and sustain military power. Powered by dedicated men and women, we underwrite the lethality of the joint force, advance American interests, and provide our nation’s leaders with strategic flexibility to select from multiple options and create multiple dilemmas for adversaries. 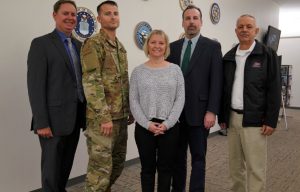