A grassroots organization, Bring Your Own Glen-Ed, is hoping to nudge people in the direction of reducing single-use plastic bags beginning next spring when a recently approved bag fee goes into effect in Edwardsville.

Mary Grose, of Edwardsville and member of Bring Your Own Glen-Ed, was the guest speaker on Monday, Oct. 21, at “Coffee with Cool Women,” hosted by the Southern Illinois University Edwardsville Women’s Studies Program. 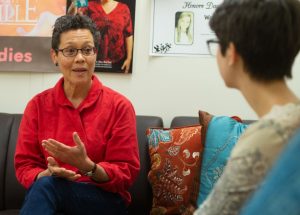 “There is a lot of plastic waste in our oceans, but there’s even more in our landfills,” said Grose, “and it doesn’t go away. It doesn’t biodegrade, and most of it is not recycled.”

The environmental concern became a battle cry for several individuals from Edwardsville, Glen Carbon and Collinsville who formed a group to address the environmental issue of limiting the use of plastic bags. The group started as a result of a larger collective, which took shape after the 2016 presidential election. Action Metro East was founded to address issues and concerns, and represent ideas on the local and state level.

“Stephanie Malench, of Collinsville, asked if anyone was interested in reducing single waste,” noted Grose. “About 12 of us got together initially. We are presently seven active members who have worked a lot for two years.”

“The main feature of the ordinance is that there will be a 10-cent fee on both single-use plastic and paper bags in Edwardsville retailers 7,000 square feet or larger,” said Grose.  “It’s optional, because it is easily avoided if you bring your own bag.  It is not a tax, because the retailer retains the fee. None of the money goes to the city.  Additionally, shoppers on public aid are exempt. The whole idea of the ordinance is to encourage shoppers to bring their own reusable bags and minimize waste.”

“Over the years, single-use bags have become a habit. However, now there are more than 100 countries in the world and more than 500 American cities that have some kind of single-use bag legislation,” she continued. “This concept is clearly gaining momentum.”

For more information about Bring Your Own Glen-Ed, contact Grose at marypgrose@gmail.com.

PHOTO: Mary Grose, of Edwardsville, organizer of Bring Your Own Glen-Ed.