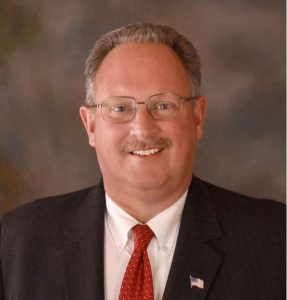 “Many communities face pension problems throughout the state of Illinois, but today with this proposal, Governor Pritzker is stepping in to ensure cities like Belleville can improve the fiscal health of our retirement systems,” said Eckert.

The governor announced this month a plan to consolidate 649 local pension funds, which altogether have about $11.5 billion in unfunded liabilities, into two statewide funds in order to ease taxpayer burden and increase the investment potential of the funds.

According to a report assembled by the governor’s Pension Consolidation Feasibility Task Force, the separate pension funds currently lose nearly $1 million dollars in potential investment returns annually, and if the funds were to perform similarly to other, larger Illinois pensions such as the Illinois Municipal Retirement Fund, the consolidated pension could earn between $820 million to $2.5 billion over the next five years.

“For years, I’ve been an advocate for a statewide solution that creates a sustainable path for all pension funds in the state,” said Eckert. “The governor’s consolidation plan is the first concrete plan we’ve seen to provide relief for local governments and stability for retired public servants.”

In many cases, struggling municipalities rely on increasing local property taxes or cutting public services in order to meet pension payment obligations, something Eckert has reversed in Belleville during his tenure as mayor.

“For the past 14 years since I have been mayor, the City has funded the pension plans to the actuarially determined amounts, sometimes more. Unfortunately, administrations of the past did not fund to the actuarially determined amount, sometimes only funding 60-70% of the required contribution, which has compounded this issue over the years,” said Eckert. “By pooling resources together and consolidating the hundreds of pension plans, we can reduce overhead and fees and boost the value of these pensions, easing the burden on taxpayers across the state.”