Madison County is cultivating a partnership with the Edwardsville Garden Club as a way to enhance the landscaping around the Administration Building and Courthouse after it removes trees to improve security. 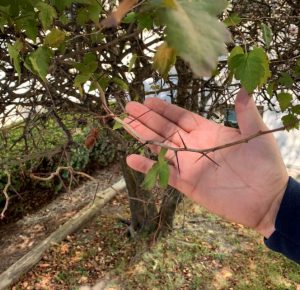 Schmidt said the trees would block access to view the entrances along Main, St. Louis and Second streets. He informed the Facilities Committee on Oct. 8 of the plan to take down the trees, including the hawthorn trees that have 2-inch thorns.

“Those trees need to come down because the large thorns create a hazard,” he said. “They are also overgrown and unsightly.”

Madison County Board member Mick Madison of Bethalto agreed. He said that he stepped on one of the branches from the tree and the thorn went through the bottom of his shoe.

“They are pretty dangerous,” Madison said. “I can see other people stepping on them and getting hurt.”

Schmidt said after informing the committee about the tree removal he contacted the Garden Club because he needed a plan to replace the landscaping around the buildings with native plant species, as well as one that would enhance the architecture of the historic courthouse.

“I don’t have the knowledge of what is suitable or appropriate so I asked the Garden Club,” he said. “They agreed to help. They’ve got a dozen club members, including two Master Gardeners, who will assist.”

He said employees would be removing the trees to save the money, and the county’s host tipping fees from landfills will pay for the new plantings.

“It is unfortunate that we have to remove the trees, however the security and safety of the public and employees is a major concern,” Schmidt said.

Chairman Kurt Prenzler said collaborating with the Garden Club is a wonderful idea.

“We are using people who are knowledgeable and it helps with the streetscape of downtown Edwardsville,” Prenzler said. “I know people are disappointed the trees are being removed, however, we want it to also be safe and allow for the Sheriff’s Department to do their job in the best providing security for the public.”

PHOTO: Hawthorn trees with 2-inch thorns pose a danger to people in and around the Madison County Administration Building.